While you’ll spend most of your time at the SfEP conference attending seminars and workshops and getting together with colleagues, it’s always useful to learn a bit about the venue too, so we’ve put together a few interesting facts about Royal Holloway London. If nothing else, sharing some of this knowledge with another conference delegate could make a helpful conversation starter. 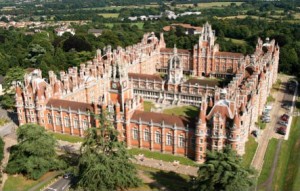 If you want to find out more about Royal Holloway College while at the SfEP conference, why not investigate the Heritage Open Day on Sunday 14 September?

Joanna Bowery is the SfEP social media manager. As well as looking after the SfEP’s Facebook, Twitter and LinkedIn accounts and the SfEP blog, she is a freelance marketing and PR consultant operating as Cosmic Frog. Jo is an associate of the SfEP and a Chartered Marketer. She is active on Facebook, Twitter, LinkedIn and Google+. In her spare time, Jo enjoys rugby (although she has retired from playing) and running.

Proofread by Jane Hammett, an advanced member of the SfEP.