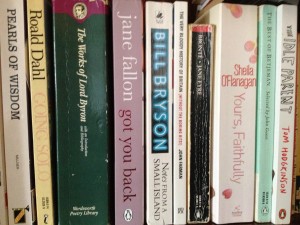 Fiction is a vast subject area. There’s no escaping this fact. Unlike non-fiction and academic texts, which have certain conventions, reference formats and factual, checkable details to fall back on, fiction is essentially ‘something that is invented or untrue’ (OED). Not only that, but the medium itself encompasses a plethora of categories: romance, thrillers, erotica, science fiction, fantasy, literary works, and so on … not to mention children’s fiction versions of most of these as well, albeit with additional considerations for the age group concerned, language levels and appropriate content!

Faced with such a behemoth, many editors of my acquaintance choose not to edit or proofread fiction. Of those who do indulge, nearly all shy away from children’s fiction altogether, deeming it too problematic, or limit themselves to particular fictional genres, usually mirroring their own reading preferences. So, with that in mind, where does one start when thinking about editing fiction?

As editors we are ethically constrained from commenting on the content of academic material, even if we know it to be wrong. Unless we are experts in that particular field of study, often we have no idea if the facts presented are invented or true. And, quite honestly, that is not our concern as long as the text reads convincingly and is grammatically correct, properly referenced and so on.

To play devil’s advocate, if fiction really is a work of ‘invention and untruth’, as long as it reads well, is it really that different from the above? And should it be treated with so much circumspection?

I understand that many editors may find fiction’s apparent lack of clearly defined boundaries extremely daunting, preferring the relatively controllable realm of non-fiction and academia. But although I do edit non-fiction and academic material on a regular basis, the thing that draws me repeatedly to fiction is, indeed, the very fact that I never know what I’m going to find in a narrative. Authors continue to surprise, delight, even frustrate me … but editing fiction is never dull.

Without question, fiction incorporates an unparalleled arena of realistic or fantastical landscapes, remarkable or mundane individuals, and gripping or bathetic scenarios, where anything — or sometimes even nothing much — goes, and everything is possible. There is a book for every occasion and mood, a genre to suit most people, and while fiction’s breadth and variety are undoubtedly its greatest challenge  — and a huge potential hurdle with regard to editing — they are also its most rewarding features.

So, are there things that connect and bind all of these vagaries together, and can provide a would-be editor of fiction with a starting point when tackling their first novel, irrespective of the genre? All books are predicated on certain elements, in terms of structure, characterisation, pace, plot and presentation. In David Lodge’s novel Therapy, beleaguered sitcom writer Laurence Passmore states: “Each one [each book] is different, but the same themes and obsessions keep cropping up: courtship, seduction, indecision, guilt, depression, despair.” And this is largely true.

Conversely, there could also be an argument to suggest that one should not edit fiction, as it could be perceived to compromise the author’s original creation. However, Terry Pratchett asserts: “… the fact that it is a fantasy does not absolve you [the writer] from all the basic responsibilities. It doesn’t mean that the characters needn’t be rounded, the dialogue believable, the background properly established, and the plots properly tuned.” So, subtle, constructive editorial assistance is still required, and usually welcomed, to ensure that what the author thinks they have done is actually the case on the page.

Essentially, fiction still involves the basics of our trade: punctuation, spelling, grammar (although this can be less rigid), textual fluidity, narrative cohesion. Even fact-checking exists: if an author states that the Empire State building has 97 storeys you can and should check that detail (it has 103!); and don’t get me started on incorrect spellings and missing accents with regard to foreign words. After all, erroneous details only provide a would-be reviewer with ready ammunition, which is something all fiction editors should bear in mind.

The characteristic that sets fiction apart from other media, making it simultaneously rather problematic but also intriguing, is the element of ‘story’, which has to be plausible within its own context and setting. As long as a reader believes the events of a novel to be feasible and credible, albeit fantastical, and the characters to be rounded, creditable individuals, then the author and editor have done their jobs.

Gale Winskill is a freelance editor who enjoys variety, and will edit most things within reason (www.winskilleditorial.co.uk). A half-Italian, dim and distant relative of William Shakespeare, she has travelled and worked abroad, finally residing in Scotland, where she plays tennis inconsistently, gardens by benevolent neglect, and is still occasionally flummoxed by Scots vernacular.

12 thoughts on “Editing Fiction: An addiction or bête noire?”