I know from the forums that some people were a little nervous as well as excited prior to the 2017 SfEP Conference, even if it wasn’t their first. I was looking forward to it, though, as an opportunity to meet in person a lot of people I had ‘met’ on the forums. And to meeting again a few friends already made at the London Book Fair in March, or in my local group. And to gleaning from everyone as much wisdom as I could that will help me to provide a good service and make a living. 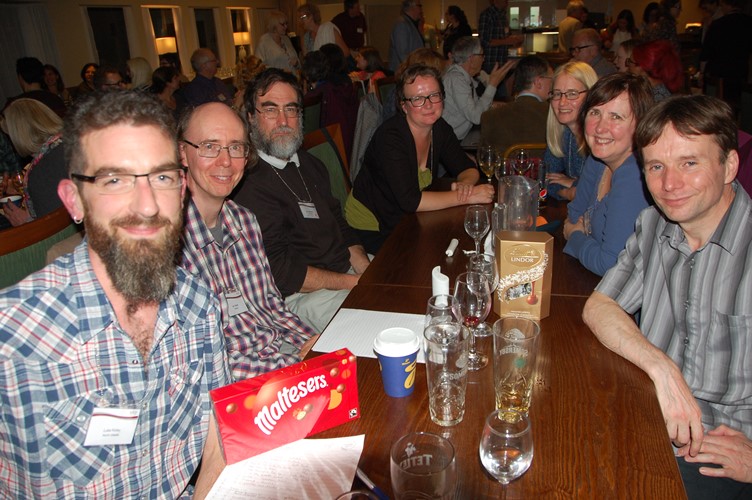 I arrived on Saturday evening just in time to acquire my name badge and a welcome glass of first-timers’ wine, but not in time to meet the directors, before we were called in to dinner. In the queue, I was immediately greeted by a fellow Shropshire-based member (hello Jill) I had not met before, and that was really the tone for the conference. I met a lot of positive, interested and friendly people. Time and again, I struck up conversations with the person next to me and made new friends.

No doubt all those who attended had several professional objectives for being there related to career development, running their business, learning new skills, making a (better) living. But what stood out for me was that many – most? – were taking the opportunity to catch up with friends. All around me on Saturday evening were people spotting each other, waving, hugging, catching up. For all the communications apps and social media available, there is nothing quite like catching up in person with people who understand your world but live in another part of it. So many genuine friendships are formed amongst people encountered as part of the job, but often living far enough apart that the friendship is for the most part conducted remotely. The conference was perhaps the only opportunity in the year or for several years to reconnect with colleague-friends.

Conference first-timers are made to feel welcome

With so many several/many-timers catching up with each other it would have been easy for us first-timers to find ourselves in a corner not liking to interrupt. But no; this was a SfEP conference and skulking in corners was not allowed. Everything was well organised, not least for us first-timers. From the pre-dinner opportunity to meet the directors (even though I missed it), to having a spot on our name badges, effort had been put into ensuring that we would feel included in the SfEP community. Several/many-timers could ‘spot’ us, engage us in conversation or incorporate us into their group; and so they did. Or we could spot each other and share our first-timer ‘spotty’ experiences to break the ice.

The formal parts of the conference: the opening and closing talks, and the workshops and sessions, were all thought-provoking and often entertaining, and I learned a lot. I have been able to put things I learned in the Word Styles session into practice immediately. I learned about charging what I’m worth, and different perspectives on approaches, tools that help and what to consider. I learned that PerfectIt will remain elusive, for me, for a little longer yet. Every session contained some pearls to help me progress.

So much to do, so little time…

There was a lot to pack in to make the most of the time available. But there was still time to look out for and chat with friends, meet new people, discuss experience and plans, hear different ideas and perspectives. I left the conference more informed and with an increased sense of being part of a society of people I respect and like.

I can only think of two regrets: firstly, that I couldn’t have gone to more of the sessions. I think Lightning Talks will be top of the list next time. Secondly, there were several people I didn’t speak to for as long as I would have liked, or at all! Where did the time go?

Attending the conference was a big investment for me, in terms of money and time. But for all I have gained initially, I have a feeling that the investment will be paying off for years to come. And it was fun.

Frances Cooper grew up in Buckinghamshire and attained a BSc in Biological Sciences from Sussex University. A varied career has included retail management, a year of TEFL in Greece and temping before she moved to Scotland to begin a 24-year career in nature conservation, working initially for Scottish Wildlife Trust, then Hampshire & Isle of Wight Wildlife Trust, and finally 13 years as Biodiversity Officer with Dartmoor National Park Authority. When a lengthy project ended it was time for a change. Frances joined the SfEP in late 2015 and embarked on SfEP and PTC training to get a sound foundation. Frances is less than a year into her career as a proofreader and still working towards establishing herself. She attends SfEP Three Counties local group meetings and is active on the SfEP forums in order to maximise the benefits of SfEP membership.