December and January were all about giveaways, grammar, goals and good dogs.

December saw the launch of our first holiday calendar campaign, which offered daily giveaways and time-limited discounts on CIEP fact sheets, focus papers, courses, guides, articles and conference-session videos. The promotion was a big hit within the global editing community and drew attention to the huge bank of valuable content offered by the CIEP. 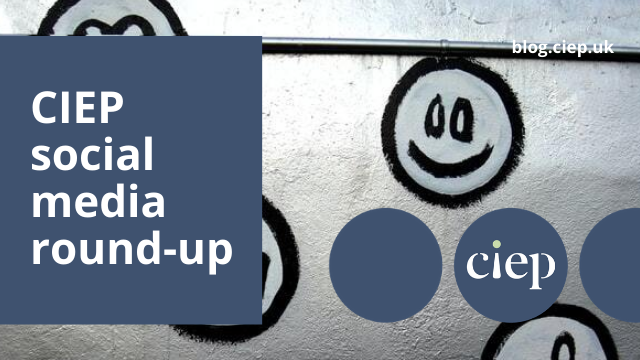 In January, we began testing Facebook ads and commissioned a social media consultant with expertise in delivering these to targeted audiences. A three-month-long campaign featuring our Word for Practical Editing course will run until early April 2021.

My grammar and your grammar, sitting by the fire

The CIEP has a new Getting to Grips with Grammar and Punctuation course, and during December and January grammar, punctuation and language usage featured prominently in our curated content, from an adverb quiz to whether it’s acceptable to say ‘try and’, the order of adjectives, the prefix un-, the word ‘multiple’, the dative pronoun ‘methinks’ and if it’s wrong to say ‘from whence’, as ‘whence’ means ‘from what place, source or cause’. This kicked off its own debate, as we suggested ‘this ever-changing world in which we live in’ was a similar example of superfluity in language and asked if anyone could name the song ‘from whence’ these lyrics came. A number of followers and friends suggested that the right words (from ‘Live and Let Die’) were ‘this ever-changing world in which we’re livin’’, which sent us down an internet rabbit hole via Stan Carey at the Macmillan Dictionary Blog to an interview with Sir Paul McCartney himself. After all that, it turns out Sir Paul wasn’t sure of the lyrics, either.

As it was the end of one year and the beginning of the next, there was a certain amount of looking back and looking forward, plus a festive article on what you should read based on your favourite Quality Street. Well worth a read at any time of the year, although it might make you hungry. We celebrated 2020’s incredible book sales (an article that got 118 likes on Facebook, the equivalent of a hearty round of applause), concentrated on setting goals for 2021, were inspired by small professional editor groups, and looked to start our own editorial blogs.

What’s in a name?

Near the beginning of December we posted a story about a set of Isaac Newton’s notes, sold for auction at £378,000, that was almost destroyed by fire when his dog, Diamond, jumped up on the table and upset a candle. Obviously our first thought was ‘what an excellent name for a dog’. As is Smurf, the starring example of a CMOS article on commas and appositives. Should you write ‘your dog Smurf’ or ‘your dog, Smurf’? It depends on whether Smurf is your only dog; if so, use the comma. This set us thinking: if Smurf isn’t your only dog, what would your others be called? Moomin, Kermit and Simba, perhaps. And in fact, Simba featured in an article in Dictionary.com about where the world’s most popular pet names come from. But not everyone wants to go mainstream, and the beauty of pet naming is that you can use a word hardly anyone has heard of like, say, sporange (the botanical structure that creates spores), which is remarkable for being the only word in the English language that rhymes with orange. Pretty distinctive. Although yelling it across your local park might be more distinctiveness than you’d be comfortable with.