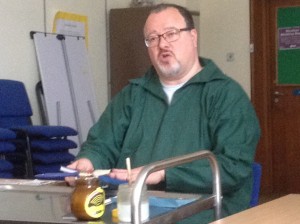 The beauty of a good piece of writing is in its content and style, which is what the editor and proofreader will tend to focus on. But hard-copy books are about more than cleverly written prose – they can often be works of art in their own right. Books can engage all our senses: the heady smell when you enter a bookshop; the sound of the paper as you turn a page; the salt you can almost taste on your lips as you read a scene depicting a windswept beach; and the pleasure that courses through your veins as you caress that dog-eared copy of your favourite novel.

Sadly, despite lots of TLC, our most treasured books can become more than a bit dog-eared. And that’s where expert bookbinders can come to the rescue, restoring our special books to their former glory.

After a fascinating session on bookbinding at last year’s SfEP conference, the SfEP Devon group recently invited Chaim Ebanks from Exeter Bookbinders to speak at one of its regular meetings in Exeter. Armed with a bone folder, needle and waxed thread, goatskin, and two Marmite jars containing mysterious ingredients (definitely not what was on the label), Chaim set about demonstrating the ancient art of bookbinding.

The session began with a brief history of writing systems covering soft clay tablets, the introduction of scrolls, the advent of paper and the use of wax tablets.

Chaim then set about demonstrating how to bind a book. The process involves sewing signatures – the folded papers that will become sections of pages – together with waxed thread before adding open-weave calico tapes to cover the sewing and strengthen the spine. The spine is then glued with polyvinyl acetate (one of the mysterious concoctions in Ebanks’s Marmite jars). Once the glue has dried, endpapers are added to the front and back and the book is covered with goatskin. The book is then placed in a clamp overnight to exclude any excess air and ensure a tight finish. The bone folder (made of whalebone) is used throughout the process to eliminate any creases or baggy edges.

Having demonstrated how to bind a book, Chaim then set to work adapting the process to restore a rather worn-out hardback copy of Dickens’s Martin Chuzzlewit. The book had definitely seen better days and its cover was completely detached.

However, after gently dismantling the cover and spine, Chaim added a new cover and endpapers before applying liberal amounts of bookbinders’ paste (the other mysterious concoction in his Marmite jars) to reveal a miraculously rejuvenated book.

It still has the character of an old book, its pages marked with foxing (browned due to the ferrous oxidisation of the acid in the paper), but now has a polished cover and gleaming name plate. The book is ready to be cherished for many years to come.

As with many SfEP local groups, the session ended with a chance to enjoy tea and cake and chat to other proofreaders and editors in the area. The Devon SfEP group are grateful to Alison Shakspeare and Rosalind Davies for organising the event and to Chaim Ebanks for taking the time to share his knowledge and expertise with them. Chaim and his colleagues at Exeter Bookbinders are happy to speak at events; you can contact them via the Exeter Bookbinders website.

There are many local SfEP groups throughout the UK and beyond – there is even an international group. Meetings vary from informal gatherings over tea or dinner to organised events such as the bookbinding talk. To find out more about what’s going on near you, visit the local groups page on the SfEP website.

Joanna Bowery is the SfEP social media manager and a member of the Devon SfEP group. As well as looking after the SfEP’s Facebook, Twitter and LinkedIn accounts and the SfEP blog, she is a freelance marketing and PR consultant operating as Cosmic Frog. Jo is an associate of the SfEP and a Chartered Marketer. In her spare time, Jo enjoys rugby (although she has retired from playing) and running.