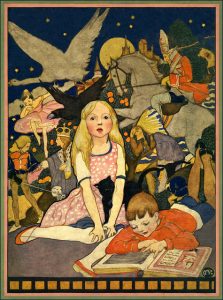 Unsurprisingly, SfEP members love books, and for many their love of reading began at an early age. To mark the 2017 World Book Day celebrations the blog team asked members to share their favourite fictional character from childhood, and, as expected from a society of bookworms, we had some wonderful replies. The team would like to thank Susan, Gillian and Jane for their contributions and we hope you enjoy reading their recollections as much as we did.

My two favourite book characters when I was a child (a long time ago) were both cats, and contrary ones at that. One was Simpkin and the other was just called ‘the Cat’. As is the way with many children’s books, both characters were fixed in my imagination by the books’ illustrations, and their creators illustrated both.

So, who were they? The Cat is the animal who craftily negotiates his domestication but who still walks by himself ‘in the Wild Wet Woods waving his wild tail’ in Rudyard Kipling’s ‘The Cat that Walked by Himself’ in the Just So Stories.

Simpkin is the tailor’s cat in The Tailor of Gloucester by Beatrix Potter. One of my personal rituals is to re-read this book every Christmas Eve. It is set at Christmas, and I still love the part when Simpkin goes out into the snow at midnight, when ‘all the beasts can talk’, and ‘the air was quite full of little twittering tunes’. 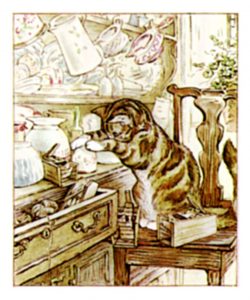 I have strands in my personality that link straight back to Simpkin and the Cat. Simpkin is at first vexed when he has to run an errand for the tailor. To make matters worse, the tailor releases Simpkin’s captive live supper of mice while he’s out. But he’s later contrite when he realises that the tailor’s kindness has saved them from penury.

I spent a lot of my childhood being vexed (which, incidentally, is where I first learnt the word: I loved the ‘v’ and the ‘x’ in one word), and then contrite. I’m not often vexed these days, but I still sometimes go for walks by myself in the Wild Wet Woods waving my (metaphorical) wild tail.

The character that springs to mind at the moment is Freddy the Pig – in a series of books by Walter R Brooks, with delightful illustrations by Kurt Wiese. Freddy is one of a number of animals that live on the farm owned by Mr Bean, in upstate New York. The animals talk to each other and to humans – which Mr Bean finds a bit embarrassing. Freddy, with his cat friend Jinx, has become an accomplished detective, and the books are usually about his exploits – often against the dastardly rat family headed by Simon.

One of my favourite childhood books is Frances Hodgson Burnett’s A Little Princess. 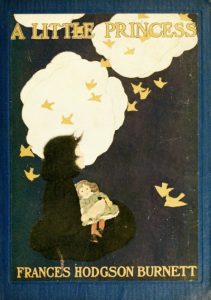 The main character, Sara Crewe, is a rich British girl who returns to London from India when her mother dies. Her father enrols Sara in a boarding school run by the vile Miss Minchin. Sara is so rich that you might expect her to be arrogant or superior, but she is not. Instead she is kind and thoughtful – and she somehow achieves this without being annoying or smug. She befriends a scullery maid, Becky, and is caring to all the girls, but especially the misfits.

Then Sara’s father dies – and his fortune has been lost. Sara can no longer afford to stay on at the school. Miss Minchin agrees that Sara can stay on – but as a servant to the other girls. She treats Sara terribly – overworking her, starving her, banishing her to a miserable attic room.

However, this reversal of fortune doesn’t change Sara. She remains unselfish and generous, and uses her imagination to make life more bearable: ‘Of course the greatest power Sara possessed … was her power of telling stories and of making everything she talked about seem like a story, whether it was one or not.’

She asks Becky to imagine a warm bed, a cheerful fire, toasted crumpets for tea. They escape into their imagination, and Sara’s courage and strength encourages Becky too.

There’s a lot we can learn from Sara about resilience – and her story is as relevant and heart-warming today as it was when I was a child.