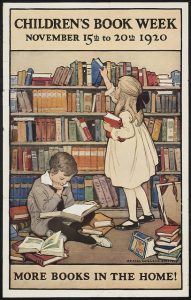 Every year, the Book Trust hosts Children’s Book Week to help young people learn the pleasure of reading, and during the week adults are encouraged to share their favourite book from childhood with the younger members of their family. To mark Children’s Book Week (31 October to 6 November 2016) SfEP members were asked to share their memories of the book they treasured most when they were younger and say why it still means so much to them today. As you can expect from a society comprised of enthusiastic booklovers, we received some wonderful replies. I hope you enjoy reading them.

Julie Marksteiner
The Naughtiest Girl in the School by Enid Blyton

My favourite book when I was growing up was The Naughtiest Girl in the School by Enid Blyton. Blyton’s school stories hark back to a simpler, more innocent time in the 1940s – a time full of tuck boxes, pinafore dresses and lacrosse matches. I was a fairly quiet, bookish sort of girl (not much has changed there), so I lived vicariously through Elizabeth Allen’s antics at Whyteleafe School. She was muddy-kneed and messy-haired, when I had to be neat and tidy. She broke the rules and did her own thing, whilst I reluctantly played it safe. I thought she was fantastic!

I was fascinated by the idea of boarding school and the camaraderie between the girls – nothing like the suburban primary school I spent my days in. I even tried my hand at writing similar school stories of my own, modelling characters on myself and my friends. You’d have to ask my mum if they were any good, though … I suspect not! 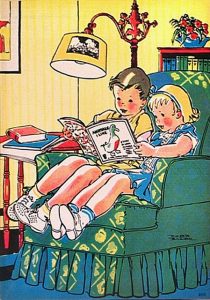 Julie Hopkins
When We Were Very Young by A.A. Milne

Children’s lit is very close to my heart, partly because I never grew out of the little girl that I was; comforting, cherished memories of sitting on my Nannie’s knee or lying in bed listening to her read to me with her soft Wiltshire accent. I only have to glance at certain books (which I still have displayed on my working desk today) and I’m transported back in time …

One of my most precious possessions is my 1970 copy of When We Were Very Young by A.A. Milne. I was three years old at the time and my grandmother used to read these wonderful poems to me to help me get to sleep. ‘Nannie’ came from Upavon in Wiltshire, and although she lived in the North West for the longest time, she never lost that soft accent. The book is a treasure trove of poetry harking back to a time now almost forgotten, when children were supposed to be seen and not heard, and to respect their parents, elders and betters. I knew ‘The King’s Breakfast’ (‘The King asked the Queen, and the Queen asked the Dairymaid…’) by heart from a very young age, and particularly loved ‘Vespers’ (‘Little Boy kneels at the foot of the bed…’) because sometimes I’d creep into Nannie’s bedroom late at night to find her doing exactly the same – and so I tried to emulate her, too! And I still can’t go into a garden centre today without wondering whether they have ‘…delphiniums (blue) and geraniums (red)’ (‘The Dormouse and the Doctor’). It was this short anthology of poems that taught me to look after my own mother or else! (‘Disobedience’: ‘James James Morrison Morrison Weatherby George Dupree Took great care of his Mother, though he was only three…’). And it was this book that served as my introduction to royalty in ‘Buckingham Palace’, where they changed guard all the time – or so I thought, imagining myself clearly as ‘Alice’! I used to believe author and illustrator E.H. Shepard was a spaceman – purely because the vignettes on the back were framed in circles, which to me looked like space helmets!

My favourite book when I was a child used to make my mum laugh her head off reading it to me, which is why I liked it. It’s no longer in print (as far as I’m aware), so my copy is much cherished. It’s a picture book called The Bear at the Huntsmen’s Ball by Peter Hacks (illustrated brilliantly by Walter Schmögner), published in 1975.

It tells the story of a bear (slightly tipsy from the start) heading off to a fancy-dress party, dressed as a huntsman. On the way, he bumps into …a real huntsman. He mistakes the bear for the ‘head huntsman’ and they head off together to the huntsmen’s ball.

Once there, all the other huntsmen mistake the bear for the head huntsman. Much drinking of beer ensues. The bear then decides they should ‘go out and shoot the bear’. Obviously.

After much drunken stumbling in the snow, and an accusation (by the bear) that the bear ‘must be hiding among us disguised as a huntsman’, the bear’s irate wife turns up, reads him the riot act and takes him home.

The story has the classic ‘he’s behind you’ element – we know the bear is the bear, the huntsmen can’t see it. (That’s beer for you, young readers, let that be a lesson!). It’s ridiculous. I love it.

Do you like Green Eggs and Ham?
Yes, I like it, fan I am.
I like the strong and rhythmic lines.
I like the very pleasing rhymes.
I like the ways it can be read –
Aloud, alone, tucked up in bed.
I like to do the funny voices –
Grumpy, lively – all those choices!
And those bold, distinctive drawings
Stop repetition being boring.
It’s said the book was written when
A publisher (slyest of men)
Bet fifty dollars Seuss could not
Create an entertaining plot
From a fifty-word kids’ lexicon.
Of course, Seuss answered ‘Yes, I can!’
He did it in exactly fifty
Unique words, which was rather nifty.
The fifty dollars he was due
Never came – that’s publishers for you.
But Seuss did make lots of money
From all his books, profound and funny,
Subversive, clever, full of fun,
Not just for kids but everyone.
So, yes, I like Green Eggs and Ham …
But what on earth’s a Sam-I-am?