Some widely held beliefs about how copy-editors and proofreaders make their living may have shaky foundations. John Firth pulls a few snippets out of SfEP’s autumn 2016 Membership Survey.

We survey our members every autumn, and we like to tease out themes and explore them from one year to the next. This year we tested some ‘truths’ about editing and weren’t surprised to find that real life’s not like that.

Well, actually… As the horizontal bars in this graph show, while quite high percentages of our members describe themselves as working in one of the four broad areas we asked about (fiction, the arts or humanities, the social sciences and STEM subjects – scientific, technical, engineering or medical), the vertical bars show that most don’t work only in those areas. 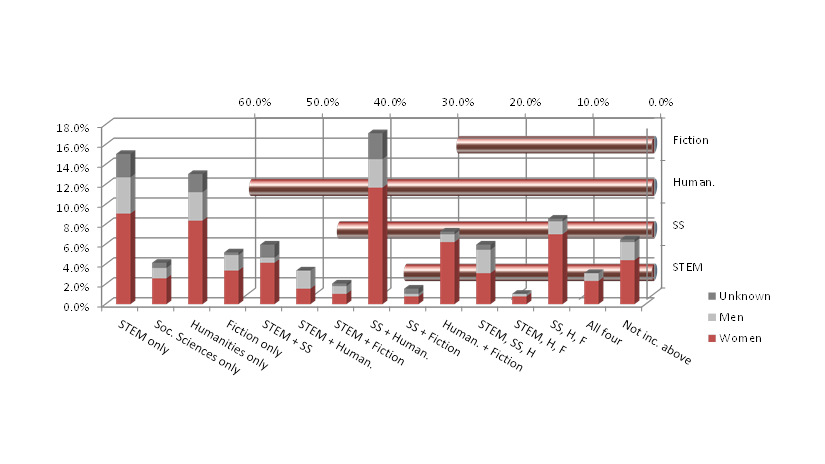 Just over a third specialise by subject (15% STEM, 4% social sciences, 13% humanities, 5% fiction). It is interesting, for example, that while 16 participants work only on social sciences subjects, and 51 only on arts/humanities subjects, 66 work in both areas.

Yes, but most editors work on books

Well yes, our survey found that nearly 80% of editors work on books, but again, as the next graph shows, only 14% work only on books: in fact, only 23% work exclusively on one type of publication. Moreover, since the ‘among others’ bars in the graph add up to 247%, most of our members work on three or more types of publication. In fact, nearly 20% work on types that we didn’t think to ask about (board-game rules and TV and film scripts, for example). 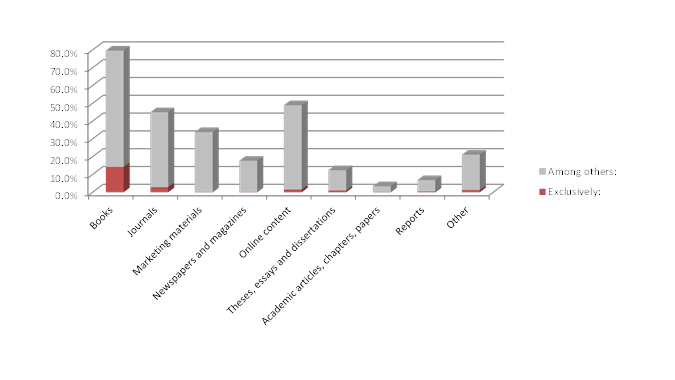 Okay, but most editors work for publishing companies

You’re right: just over two-thirds do, but our survey found that only 8% of editors work just for publishing companies and I’m going to bore you with another graph: 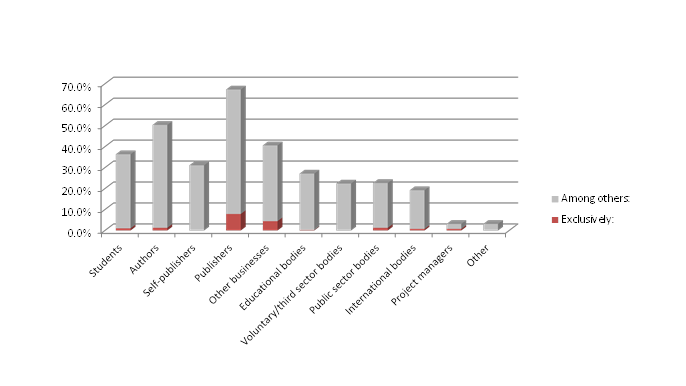 It’s the same pattern: just under 18% specialise, and more than 305% work for more than one type of client (so we can suggest that most work for two or three types of client, and many for more than four).

But surely they’ve all worked in publishing at some time?

Sorry to contradict: before coming to the profession, nearly 60% of the participants in our survey had never worked in publishing. Moreover, high percentages of participants who currently work in-house for publishing companies had previously worked outside publishing. This summarises these members’ backgrounds: 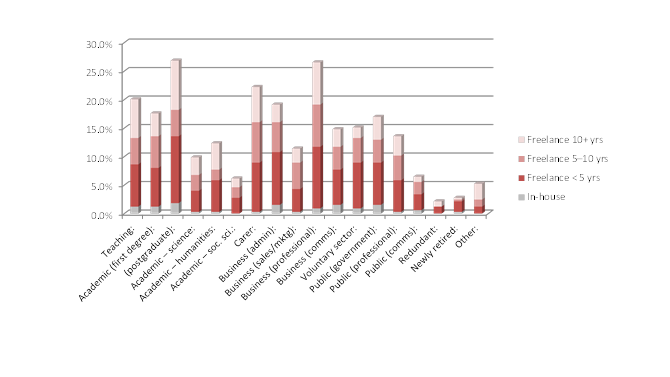 So, how representative is your survey?

We received surveys from 402 members, almost exactly 18% of our membership, in November 2016. In 2010 the Professional Associations Research Network concluded that ‘most organisations … receive an 11–15% response rate’ to membership surveys; so this is a good response. We found that Advanced Professional Members and members who had belonged for more than five years were over-represented in the results; and that the percentages of participants who were Intermediate Members, Professional Members, members who had recently joined and members who had belonged for between three and five years were about the same as those groups’ ‘share’ of the total membership. For all of these groups the balance between male and female participants was quite close or very close to the ‘mix’ among all members in that group. This suggests that the results are a good reflection of how established editors spend their time.

For his sins, John Firth is the membership director of the SfEP.

If you’d like a copy of the survey, a PDF can be downloaded from here: 2016 Membership Survey.