Following on from Lynne Murphy’s recent focus paper about global Englishes, the CIEP information team asked if I’d write a piece about my native variety, Australian English. Of course, Australian English is spoken by around 25 million people over a huge area, and there are some small regional differences, but much less than with UK English. Most of the differences are simply a handful of different words, and it’s generally impossible for one Australian to tell which part of Australia another speaker is from just from their accent, though there are potentially one or two subtle signals: for example, if someone talks about Malbourne [æ] rather than Melbourne [e], they’re likely to be from Victoria; but many Victorians say Melbourne in any case. Leaving aside pronunciation, though, what is written Australian English like, and what sources would an editor use to copyedit it?

The conventions of Australian English tend to be UK-based rather than US-based, although this is perhaps gradually changing. So spellings such as centre, theatre and defence are usual, and you would normally find traveller rather than traveler. Equally, in cases where there is no single UK English convention, the same is true of Australian English: for example, the verb suffix is more likely to be -ise (and this is required by the Australian Government’s Style Manual and is given first in the Macquarie Dictionary), but -ize is also common.

There are some peculiarities. One of the most notable relates to -our versus -or. The standard convention in Australian English follows UK English, with -our, although one of the major newspapers, The Age, used -or until the 1990s (when, I suspect, stories began to be more commonly written for several newspapers with the same owner, requiring consistency across different newspapers). However, for historical reasons that no one is entirely certain of, one of the two largest political parties in Australia is the Australian Labor Party, with no u. (The other large party is called the Liberal Party of Australia, although it is the equivalent of the UK Conservative Party; this leads to Australians talking about small-l liberal values when they need to make it clear they don’t mean conservative ones.)

Then there’s program(me). Leaving aside computer programs, and simplifying the story, the spelling program became usual in government documents by the 1980s. Following that, the word became a political football, with a more conservative prime minister insisting on the government having programmes, then with a change of government there were programs again, then programmes, and now things seem to have settled back with programs. This means that if you want to find out, for example, about the Australian Government Reef Programme, you need to consult the website of the National Landcare Program. For a while there, you could tell someone’s political leanings on the basis of their spelling …

Apart from pronunciation, the most obvious differences between UK and Australian English relate to vocabulary items. Of course, there are the names of animals and plants found only in Australia, but authors and editors are much more likely to trip up on concepts which are shared but where there are different words to refer to them, particularly when the same words are used with different meanings in the two varieties: the fact that an Australian can be entirely respectable when dressed in nothing but a T-shirt, pants and thongs sometimes amuses the British, for example, although why being dressed in a T-shirt, trousers and flip-flops should be amusing, I don’t know. 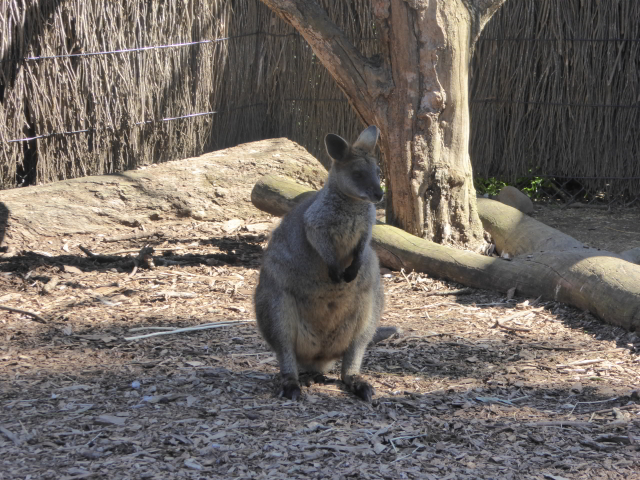 One minefield for authors and editors relates to words used in reference to the Indigenous peoples of Australia: as you might expect, there have been changes over time and it is a vexed issue. Probably the earliest modern position was that represented by the 1988 version of the Australian Government’s Style Manual, which recommended Aboriginal as the adjective but Aborigine(s) for the noun to refer to Indigenous Australians; but some people preferred Aboriginal(s) as the noun, on the basis that this was simply saying something about the person in question, rather than categorising them. This debate continues, and it is often avoided in practice by ensuring that the word always modifies some other noun. However, there are also entirely separate groups of Indigenous Melanesian people on Australian territory, the various Torres Strait Islander peoples, who historically were often mistakenly referred to using the term Aborigines. By the time of the development of the (now disbanded) Aboriginal and Torres Strait Islander Commission in 1990, it had become common to explicitly link the two sets of groups, especially in more official contexts; and health or census forms commonly ask ‘Are you of Aboriginal or Torres Strait Islander origin?’ The term Indigenous Australians is relatively neutral, but some Indigenous people consider that this is an external, bureaucratic, imposed label, and prefer to refer to themselves as First Australians or First Nations Australians; many will often also use the term Black, although because of its history, that can be considered offensive if used by non-Indigenous people to refer to Indigenous Australians.

In fact, before the European settlement of Australia, there were over 250 groups of Aboriginal peoples, and there are 14 inhabited islands in the Torres Strait, so the search for a general term is often a little like trying to decide whether Asians would be the appropriate term to use when introducing a woman from Indonesia together with a man from Israel. Modern usage is generally to follow the preference of any individual, and otherwise to use the most specific possible term: a Pitjantjatjara man, one of the Kaurna people. To complicate matters, there are also approximately state-based terms used by many Indigenous people themselves (and by others), such as Koori for an Aboriginal Australian from Victoria or New South Wales, or Murri for an Aboriginal Australian from Queensland or northwestern New South Wales. (See the Style Guide for a more in-depth discussion.)

While complex, all of the issues above are relatively easy to notice, if sometimes hard to resolve. Trickier for an editor are the more subtle differences between Australian English and UK English.

Some of these differences stem from geography and social history. I’m still always startled when in the UK I’m told someone is Asian, and then they invariably turn out not to be from China, Thailand or Vietnam, the default meaning of Asia in Australian English (like in US English); and while Australia has one of the most urbanised populations in the world, there is a strong cultural attachment to the bush and the outback, words that tend not to be used in the way non-Australians think. 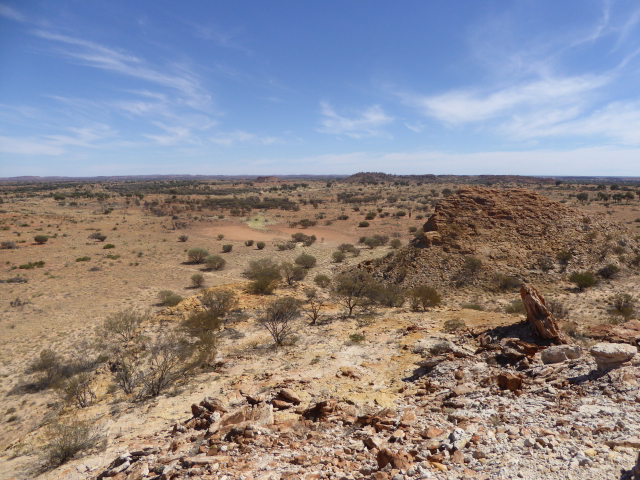 The outback, not the bush. The view from Chambers Pillar, a sandstone formation near (ie 100 miles away from) Alice Springs.

Australians also think of distances in a different way from Britons, and the realities of travel in an often highly mobile population add to this. Not everyone in Australia has my experience while growing up of alternate holidays consisting of driving north for 10 hours to visit my paternal grandparents or west for 13 hours to visit my maternal grandparents, but it’s not considered particularly unusual (and in each case, isn’t even a third of the way across the country). So Australians are entertained by my anecdote about queuing behind a woman at Sainsbury’s who was justifying buying two packets of lollies (well, she was English not Australian, so she said sweets) because she had to keep the children happy during a ‘long’ drive the next day; it turned out she was going slightly less than two hours away.

Then there are those subtle differences that are inexplicable, and sometimes almost unexplainable. In both Australian and UK English, collective nouns such as committee and government can come with singular or plural verb agreement; but as an Australian, I often hear the singular used in UK English where I would be expecting the plural. And plural nouns are more commonly used in the UK pre-modifying other nouns: you wouldn’t expect a charity to be called the Cats Protection League in Australia; instead, you have the Cat Protection Society of NSW.

Just like in the UK, there is no overall authority on what formal Australian English writing should look like. The most widely known style guide is the Style Manual, originally published in 1966, which has gone through a number of editions, with changing recommendations. The manual is only intended for publications written by public servants (civil servants) who work for what more recent editions refer to as the Australian Government, but earlier ones refer to as the Commonwealth Government; the manual is not even used (explicitly) by the governments of the different states and territories. The online beta version of the 7th edition is currently getting quite a lot of publicity (including on the CIEP forum!), with one of most controversial suggestions being that one should ‘generally write numerals for 2 and above’. This reflects the fact that this recent edition takes an explicit ‘digital-first approach’, with many of the suggestions based on readability guidelines that were developed specifically for web-based content.

Through much of the 20th century, there were ‘Australianised’ editions of major UK dictionaries, particularly the smaller versions, and these still exist (eg the 6th edition of the Australian School Oxford Dictionary appeared in 2016). However, in 1981 the first edition of the Macquarie Dictionary appeared, the name relating to the fact that the editorial committee for the original edition consisted largely of staff from Macquarie University. This dictionary, now in its 7th edition and with various different versions (eg the Macquarie Concise Dictionary, the Macquarie Dictionary Online), is now generally accepted as ‘the’ dictionary of Australian English. The larger versions contain encyclopaedic entries, including the names of many famous people and places relating to Australia.

There is also the Australian National Dictionary, originally published in 1998, part of the Oxford University Press line-up of Australian dictionaries. However, it is not a generalist dictionary, but rather one that focuses more specifically on Australianisms, with words either used only in Australia or with particular Australian-related meanings.

People sometimes talk of Australasian English or Antipodean English, and there are similarities between Australian English and New Zealand English. Both are UK-focused in stylistic terms – NZ English probably more so than Australian English – and there are some words used in the two varieties and not in other Englishes. But each has its own peculiarities: possibly most famously, Australians wonder why New Zealanders call an esky a chilly bin, and NZers wonder why Australians call a chilly bin an esky, while the rest of the world wonders what on earth we’re on about (a cooler or cool box). There are also differences relating to the historical presence of only a single Indigenous language, Māori, on the main islands of NZ/Aotearoa, and the declaring of this language as a national language in 1987. But we’d need an editor from NZ to elaborate on this, whether they were Māori, Pasifika (with ancestors from other Pacific islands), Pākehā (of European descent) or other – anyone out there willing to take it on?

Tim Curnow grew up in Canberra (apart from a year in Ecuador, a year in Colombia and a year backpacking around Europe), then worked as a linguist and applied linguist at universities in Canberra, Melbourne, Brisbane and Adelaide. Then he moved to Royal Leamington Spa in the middle of England and started TJC Editing so that he could copyedit other people’s academic work instead of having to write his own.

6 thoughts on “Grab your thongs and the esky, we’re off to the (Australian English) beach!”