This year’s CIEP conference was held online, from 12 to 14 September. Attendees from all over the world logged on to learn and socialise with their fellow editors and proofreaders, and a number of delegates kindly volunteered to write up the sessions for us. Cathy Tingle reviewed Benjamin Dreyer in conversation with Denise Cowle. 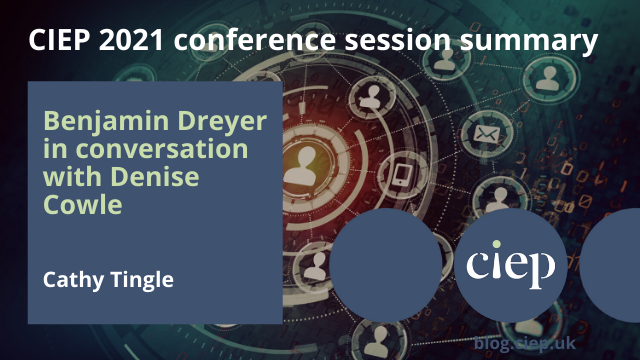 The plenary session of this year’s CIEP conference was particularly eagerly anticipated by those of us who enjoy Benjamin Dreyer’s expertly crafted Twitter posts and devoured his fun yet bracing book Dreyer’s English: An Utterly Correct Guide to Clarity and Style. Benjamin Dreyer has a way with words, and in this short talk and longer interview with Denise Cowle, the CIEP’s marketing and PR director, he didn’t disappoint – even over a jumpy connection which added to the feeling that he really was speaking to us live from New York.

Like many of us, Benjamin Dreyer came to editing after trying other things. Following a casual-sounding introduction to the production editor of St Martin’s Press by a writer friend who spotted his talent, he was given some freelance proofreading work. It became an apprenticeship in copyediting. In those days, editing was done on hard copy. ‘I was seeing what sort of questions copyeditors asked. I saw there was more to this than “let me fix your spelling and let me see your subjects and verbs agree”.’ Asked by Denise whether he would tell new editors to start out by proofreading, Benjamin advised: ‘You should get your feet wet doing proofreading. It’s a lower-risk job, for us and for you. It’s one of the best ways to really learn how the editing works, to really see what the copyeditor does.’

Moving on to employment at Random House, Benjamin worked among some of the leading lights of editing including Bob Loomis who had been there such a long time that he remembered Faulkner visiting the office.

Random House has no house style: ‘Every book has to be approached on its own terms, with fresh eyes, with a fresh brain, to try to make the book into the best possible version of itself that it can be.’ This has been the mission of Benjamin Dreyer’s working life. He tells new editors: ‘Read the first 25 or 30 pages of a manuscript with your hands behind your back. Pay attention to what’s going on before you start working on it.’

As Random House’s copy chief, Benjamin famously only has one copyediting client these days: Elizabeth Strout, author of the Olive Kitteridge books, an arrangement that came about after Benjamin walked into her then editor’s office and pronounced her latest book ‘remarkable’. How did he find the experience of being edited when Dreyer’s English was in production? He asked for a particular copyeditor, much as Elizabeth Strout did with him, and described his editor’s method, of providing him with a better version of his own text, as ‘wonderful’. ‘You sound more like I sound than I sound’, he would say to her: a standard of editing for us all to aspire to.

You can’t interview Benjamin Dreyer without asking certain questions, and Denise did this expertly. One was about his outspoken disapproval of those who eschew the series (or serial, or Oxford) comma. I held my breath. But Benjamin protested a certain amount of tongue-in-cheek mischief, and explained: ‘There has to be this balance of truly, earnestly wanting to help and to get them to laugh, to pay attention.’ And so a stooshie – a great Scottish word that Denise used and Benjamin wrote down for future use – was avoided.

Right at the end of the interview – if there had been credits they would have been rolling – Denise posed the question suggested by Louise Bolotin but that we all wanted answered: ‘Why when Random House merged with Penguin was the new company not called Random Penguin?’ We weren’t the first to ask, it seems: ‘Everybody wanted and prayed that Random Penguin would be the way. People designed rogue logos. But we ended up being Penguin Random House. And that’s OK too.’

And then it was over, and so was the conference, and after we’d mopped ourselves up following CIEP chair Hugh Jackson’s closing remarks, those of us who tweet headed back to Twitter where we found a lovely message from Mr Dreyer: ‘I just had a spectacular time talking to the wonderful folk at @The_CIEP, and we didn’t come to cross-cultural blows! #CIEP2021.’ Utterly correct. 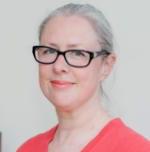 Cathy Tingle is an Advanced Professional Member of the CIEP. She is a non-fiction copyeditor and proofreader, runs copyediting training for Publishing Scotland and is a member of the CIEP information team.

You can connect with her on Twitter and LinkedIn.