It’s the Great Big Green Week, so it seems like the perfect time for Robin Black to introduce us to the members of the CIEP’s Environmental Policy Working Group (EPWG). 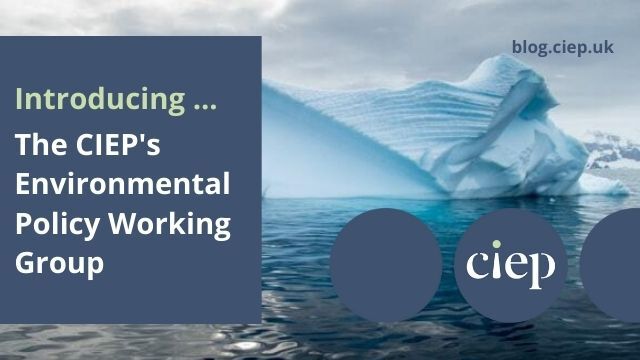 It’s a funny thing being part of our Institute’s working groups. Editors, subduing their own opinions frequently in service to the client, are either by nature or by practice disinclined to be seen telling people what to do. We may work out our persnicketiness in the limited realms of spelling, punctuation or syntax, where ‘It depends’ is superseded by ‘You don’t want to look silly’.

In the virtual professional space of the Environmental Policy Working Group, attended by a handful of circumspect editors, we are prone to figuring out the brief and then rising to the occasion; making individual contributions in small doses; listening; anticipating objections; and bringing to the table healthy amounts of self-doubt.

But is that enough? Given the scale of the climate crisis and how late we all are in addressing it, the challenge can’t be left to the experts and crusaders. It certainly can’t be left to the governments. John Robinson, one of many lead authors on the most recent IPCC report, says that the notion of sustainability jobs doesn’t hold up; rather, there will be no careers left without sustainability dimensions.

And so our humble working group has developed an environmental policy for the CIEP. Will it work, whatever that means?

Oh, boy. That’s a doozy. Some of you have been out on the streets to demand change; some of you have honed important lines of communication to get the message out; some of you feel that everything will be fine. We like the idea of reaching the membership, wherever you’re sitting, with these questions. We are just CIEP members ourselves, after all.

How did we, the members of the EPWG, get here?

When I was in the sixth form at school, I asked a friend what career he had in mind. He wanted to be an ‘ecologist’. That was a completely new word to me, so he told me about books like Rachel Carson’s Silent Spring and about emerging environmental movements like Friends of the Earth and the Sierra Club.

That conversation 50 years ago sparked a lifelong interest in environmental matters. The publication a year or so later of EF Schumacher’s influential Small Is Beautiful: A Study of Economics as if People Mattered was another big step in my environmental education. That interest has led me to take some practical steps over the years to reduce what we now call my environmental footprint, including cultivating organic gardens and an allotment for over 40 years.

We can all do better, of course, and the CIEP can play its part by reducing the organisation’s environmental impact. It can also play an important role by offering practical advice to its members on how to run their own businesses in as environmentally friendly a way as possible. Members of a community of over 3,000 people will also have many ideas and practical suggestions to share that other members can adopt and benefit from.

Not enough has been done to change over the last 50 years or so of environmental awareness, so the world is now facing its greatest crisis because of global warming and the over-exploitation of the earth’s resources. The adoption of the CIEP Environment and Energy Policy is a small but important first step for the organisation and its members.

In my application to join the EPWG, I said I was keen ‘to help the CIEP formulate an environmental policy that is both ambitious and workable, and to support members to embrace and advocate for regenerative practices in their working lives and beyond’.

I also outlined my three decades of environmental activism, from badgering people in the streets of Liverpool with an eco-survey in my mid-teens (I wonder if any of my victims recall that early climate alarm call?), through arts-based initiatives such as an experimental Permaculture Surgery, to more recent efforts to incorporate my passion for savvy ecological practice into my editorial work.

We are without doubt in a critical era for humankind, and a liveable future depends on our collective actions now. We need nothing less than system change. So many of the stats are bleak, but what keeps me going is the knowledge that nature is powerful: every positive contribution will harness a profound regenerative force. So let’s see what we can do!

I was a young child when my awakening to environmental justice happened as I cried at images of the Ethiopian famines during the Live Aid concerts.

Fast forward to 2000 and one of my first jobs for an NGO was to write a guide to climate ‘change’ (before that term was replaced by ’crisis’) which pulled data from the UN Intergovernmental Panel on Climate Change reports. Approval of this complex project was given by the atmospheric physicist the late Sir John Houghton. Among the hardest projects I’ve ever worked on, it is one I am proud of – but also haunted by: we’re still talking about the same issues.

‘There’s no planet B.’ This rallying cry sums up why I jumped at the chance to be part of the EPWG.

It’s one small way to channel eco-anxiety, but I also hope that the EPWG can inspire our members, other freelancers and businesses. It’s governments and corporate change that will make the biggest difference to the environmental crisis through policy change, but it’s our voices, actions and words that keep up the pressure.

I first became aware of the problems we face while in secondary school, back in the early nineties. The voices of environmental activists were beginning to multiply as the world grappled with new science and the occasional cataclysm. It was hard not to notice.

After studying environmental science at university and working in the sector for nearly 20 years, I switched to freelance editing and writing.

I’ve never been an activist myself. While louder voices are essential for raising awareness, change should also be brought about through practice. Working with businesses to implement change is, in my view, one of the best ways. Many organisations want to be seen to be doing the right thing and to differentiate themselves from the competition. Those of us on the inside have continued to encourage, cajole and push them to lead the way. It is now no longer a differentiator but a requirement.

Occasional cataclysms have become regular occurrences, and we are dealing with a brave new world. The CIEP called on volunteers to develop an ambitious environmental policy and to support its members in the same. The opportunity was right up my street, and I got my application in straightaway!

In the pages of Dark Mountain, the writer with druidic tendencies John Michael Greer tapped on the fragile glass of my assumptions with ‘the recognition that the universe is indifferent to human beings, not sympathetic, not hostile, not anything, and that it’s really rather silly of us, all things considered, to expect it to conform to our wishes …’. In other words, no truism is in place to stop life on Earth from getting really, really bad. The melted ice of the climate crisis poured through my now-broken glass; it hurt, and I was scared.

Armed with an editor’s overdeveloped sense of responsibility at seven years old, I’d been recycling and turning off lights since then, just as they taught us when the school board sent speakers to our classrooms with age-appropriate information about the environment, street drugs and rabies(!). But personal responsibility was never going to get us out of this mess, and governments still aren’t behaving like it’s an emergency, which it is. Given the mismatch between the urgency and government action after all these decades, I am not an optimist about our chances.

Energy and buildings are in my blood. Growing up in Sheffield, a focal point of the Industrial Revolution, we learned at infant school of the city’s long history of metalworking and how important the local wood and coal supply was to the revolution. Amid the power cuts, industrial strikes and oil crises of the early 1970s, we knew well of the smog and pollution of industry; while the strangeness of the shifting seasons and the occasional dramatic flood fed our Yorkshire folklore.

I almost gave up undergraduate physics, but modules in quantum mechanics and chaos theory rekindled my interest, and after graduation I set off on my goal to help scientists communicate their research. The ‘hole in the ozone layer’ was in the headlines, and collective international action stepped in to tackle it. As part of a youth delegation to NATO, I heard scientists warn of mass migration as one of the many consequences of ‘global warming’.

I ultimately found my favourite editorial home in what was then the UK government’s Energy Efficiency Best Practice unit, working on documents about saving energy in buildings, as well as energy and environmental policy. I’ve worked in the ’green’ sector ever since, for several high-profile national and international bodies, focusing more in recent years on international action on climate change.

I was very keen to join the CIEP’s working group and do my bit to help others do theirs. It’s even slightly easing my frustration that it’s taken so long to get this crisis up the global agenda, despite decades of scientists (and their editors) banging on about it.

Have you made changes to reduce your impact on the environment? Would you like to know more about what changes you could make? Let us know in the comments.

Photo credits: ice by Derek Oyen; it’s not easy being green by Markus Spiske on Unsplash.