In the first part of this blog, I explained why I’m a fan of podcasts and how their focus on narrative and storytelling make them particularly appealing to writers and editors.

In this second part, I’ve identified a few shows that I think fellow editors may enjoy – and they’re not necessarily what you’d expect. It’s just a small selection from the two million plus podcast series that are available, so existing podcast fans will probably wonder why I’ve not mentioned their favourite show. Well, I probably don’t know about it – but I’m always looking for new ideas so do put a link in the comments to any podcasts you love. 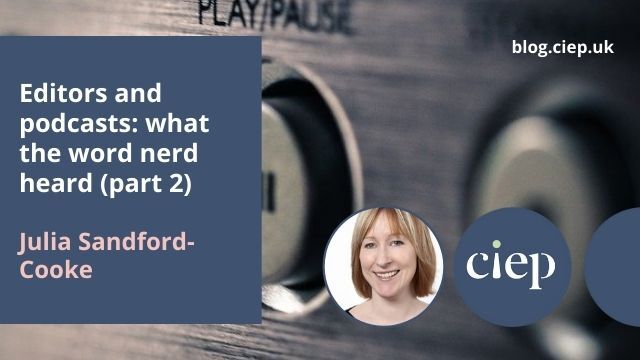 1. Podcasts about working with words

I only listen to a handful of podcasts that deal explicitly with language. I spend enough of my day wrestling with words as it is. But these are all diverting enough for listening not to feel like work, and could even be regarded as CPD (continuing professional development).

The Editing Podcast: All about writing and editing

Our friends, CIEP directors Denise and Louise, may have given you your first taste of the wonderful world of podcasts. They already have six seasons of bridging the gap between writers and editors, showing that our profession is both approachable and knowledgeable. What better combination? Add to that the fact that their shows are short and they don’t take up all your phone memory, and it’s a must-listen.

By the Book: The power of books and friendship

Here’s another couple of literary ladies, these ones quite different to Louise and Denise. Kristen and Jolenta live by a different self-help book each week, with varying results. For editors, it’s fascinating to note what it is about this genre that appeals to readers. But it’s not so much about how useful the books are, as about how powerful relationships are. Even if you have little in common with their New York lifestyles, these two not only are great role models as friends, but also seem to have helpful and supportive husbands who don’t mind their personal lives being recorded for the entertainment of thousands of listeners.

Because Language (was Talk the Talk): Cutting-edge linguistics

Much of the engaging character of this show also stems from the relationship between the three presenters. They take a very modern and descriptivist approach to language use, which is interesting from an editorial point of view. One might argue that they can be a little too tolerant of certain uses while shutting down others, but that’s the balance that linguists must negotiate.

For another option, Lingthusiasm is probably the best-known linguistics podcast, due to one of its presenters being the author of the excellent book, Because Internet – and it is worth listening to – but I have to admit my mind tends to wander during their lingthusiastic discussions.

The Allusionist: Exploring language in society

Helen Zaltzman explores language in relation to everything from cookery books to the censorship of Brazilian newspapers to Dickensian theme parks. It packs a lot into 20 minutes or so, and sheds a lot of light on both American and British culture, including the latest thoughts on sensitive language. The transcripts are particularly comprehensive, with lots of supporting material and enough links to get lost in for the rest of the day.

Something Rhymes with Purple: Jolly japes with Gyles and Susie

Everybody loved Susie Dent’s interview at last year’s CIEP conference and her etymological podcast with National Treasure™ Gyles Brandreth is just as entertaining. Both presenters are incredibly erudite, but wear their learning lightly (unlike Gyles’s famous jumpers) as they spark off each other while discussing the words of the week. It’s also quite funny to hear these respectable celebrities discuss sex and swearing so openly.

For ideas for more podcasts about language and writing, check out the suggestions at Podchaser and Book Careers. 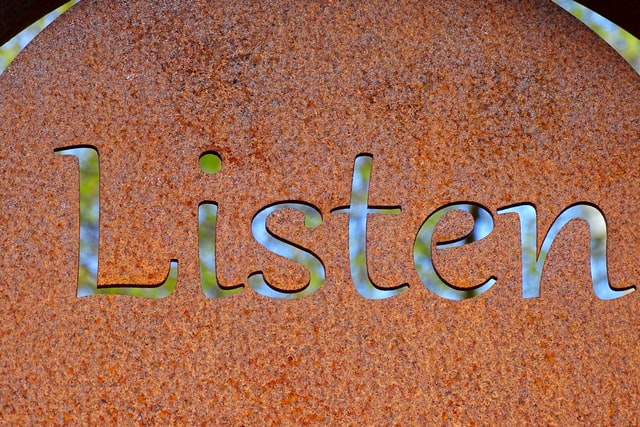 2. Podcasts about narrative and storytelling

You may have noted that, for me, the appeal of my favourite podcasts often comes from the interaction of the presenters, and how they construct their narrative.

It’s the same for these podcasts, which focus on broader themes – real experiences and the world around us.

The Moth: The art of (true) storytelling

This is the original performance-storytelling podcast – real-life anecdotes told live on stage without notes. From an editorial viewpoint, it’s about constructing a compelling narrative but, on a more emotive level, it’s about life experiences across different times and cultures. Some stories are funny, some are tragic, some are compelling, all are memorable.

Don’t miss a lovely story by Mr PerfectIt himself (I nearly crashed the car when I heard the name Daniel Heuman), the amazing experience of an astronaut struggling to swim, or my absolute favourite – a woman remembers how reluctantly collecting milk-bottle tops for charity became something much greater than she expected.

Also check out spin-offs like The Dublin Story Slam, which features mostly Irish storytellers recounting their experiences. Mortified is another variant on the theme, in which adults read out their own teenage diaries on stage, with comical and cringeworthy results.

Spooks and Bogles: Never let the truth get in the way of a good story

Actor, author and historian (and – disclaimer – my friend) David Kinnaird found himself short of an audience at the start of last year’s lockdown so, with typical energy and panache, he used his considerable knowledge and performance skills to write and perform a weekly podcast about Stirling’s history and ghost stories. If that sounds a little esoteric, well, that’s part of the charm, but David’s research and storytelling is exemplary. And in fact, after around 70 episodes, it’s broadened its focus to Scottish, and sometimes Irish and English, folklore – the starting points for fascinating explorations of history, politics and the nature of reality.

For context, start at the beginning with Dead Man Talking.

This one’s a lesson in style for non-fiction editors – every episode succeeds in vividly explaining the influence of design and inventions on the world. Presented by the memorably named Roman Mars, each of these mini-documentaries about architecture or technology or town planning or ‘Who Let The Dogs Out’ by the Baha Men* will have you repeating random facts at everyone you meet.

They’ve covered almost literally everything – but several episodes are about books and here’s a recent episode, The Clinch, about the sexy covers of romance novels.

*If you’re interested in the origin stories of cheesy pop songs, an honourable mention goes to this uplifting episode of Every Little Thing, about the origins of that wedding-reception classic, ‘Cha Cha Slide’.

How I Built This: The stories behind the brands

Another memorably named presenter, Guy Raz, interviews entrepreneurs of brands you may or may not have heard of about their experiences of starting, running and sometimes leaving businesses. It sounds horribly dry and capitalist but it’s actually very engaging – another lesson in how storytelling works in factual contexts too. Guy’s politely probing interviewing style results in some candid revelations from CEOs. Look out for him making a point of asking both women and men how they balanced work with childcare, and also note the answers to his most famous question … was your success due to skill or luck?

As a daily Duolingo user, I like this episode about the surprising story of the world’s top language-learning app.

Beautiful Anonymous: A weekly tribute to empathy, openness and honesty

It’s a simple premise. New Jersey comedian Chris Gethard chats with an anonymous caller for an hour. They tell their life stories in their own words, so you get perspectives from those whose voices you may not normally have a chance to hear. Some callers have rather dull lives; others certainly do not – but it’s all about what it is to be human.

There are more than 270 episodes so far. Chris himself recommends his favourite early episodes in this article.

And you’ll never think of pomegranates in the same way again.

Enjoy listening and do tell me about your own favourite podcasts – the more obscure the better!

Julia Sandford-Cooke of WordFire Communications has spent more than 20 years in publishing. When she’s not listening to podcasts, she writes and edits textbooks, speaks very bad Dutch and posts short, often grumpy, book reviews on her blog, Ju’s Reviews.