Some very simple expressions can cause a quandary out of proportion to their size and frequency of use. In this article from the Finer Point archives, Luke Finley looks at one such phrase that often tests us. His article covers: 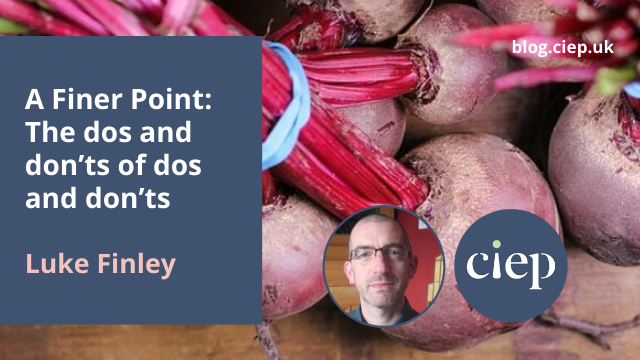 This column is usually about the dos and don’ts of grammar – or, more accurately, the dos, don’ts, maybes and maybe-nots. This time round, it’s about the phrase dos and don’ts itself. It might seem a rather narrow concern, but it can cause confusion: I counted at least seven discussions on it in Facebook editors’ groups in the last couple of years. So, what are the options?

The least-punctuated version is my preference. If you have more than one do, it seems natural to call them dos. The Oxford English Dictionary, the New Oxford Dictionary for Writers & Editors, The Chicago Manual of Style, the Guardian style guide and Bill Bryson are all happy with this. That’s authoritative enough for me.

But, admittedly, the drawback is that dos looks more like it should rhyme with boss than with booze, which may bring the reader up short. Hence the other options …

Some people who would turn the colour of beetroot at a sign reading ‘beetroot’s £2/kg’ nevertheless favour an apostrophe here. But while it seems to go against a basic rule of English, there are some comparable examples where this is accepted (by some!). Grammar Girl points to the phrase Mind your p’s and q’s, and the two a’s, not as, in aardvark. And some style guides agree: the widely used Associated Press guide, for example, prefers do’s and don’ts.

You might be thinking that if you’re going to apostrophise do’s, the other word should be treated the same way: don’t’s. If so, Lynne Truss (Eats, Shoots and Leaves) agrees with you. I’ll leave it to you to decide whether that’s an argument in favour of it or not.

There’s a logic to this version. It overcomes the pronunciation issue without resorting to greengrocers’s apostrophe’s. It also arguably makes semantic sense: these ‘do’s are instances of someone saying ‘do X, Y and Z’, hence the quotation marks. On the other hand, you may feel, as I do, that it looks like someone’s gone wild with a salt-shaker full of punctuation marks. And just imagine it with double quote marks …

So there’s no hard-and-fast rule here, but as usual that doesn’t mean people don’t have some strong opinions about what looks and sounds right. As US editor Jake Poinier commented in a Facebook discussion on the usage, ‘50% of readers are going to think it’s wrong, no matter which you choose’.

This article originally appeared in the November/December 2018 edition of Editing Matters.

Read my ellipsis by Riffat Yusuf

Self-help: a guide to reflexive pronouns by Cathy Tingle 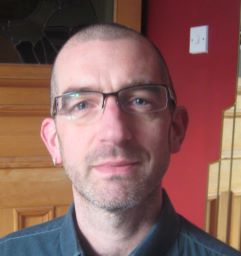