Applying sentence case to titles is as straightforward as applying capital letters to sentences: more complicated than it first appears. Cathy Tingle considers proper nouns, identity and emphasis to investigate why we might add capitals in sentence case. 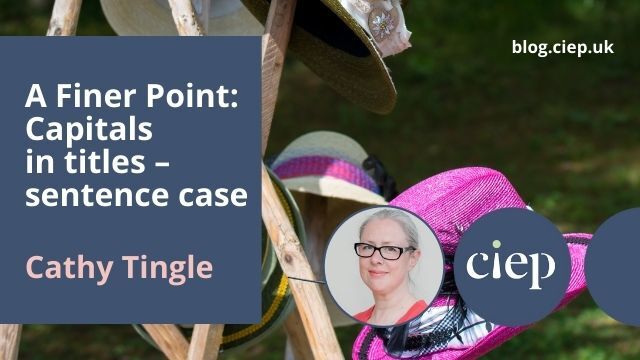 In some areas of editing and proofreading several tricky issues converge. You have two options with these: try wherever possible to avoid them, or tackle them head-on. Other brave, sparky, go-ahead souls will do the latter without question. I invariably start with the former and then slide into the latter when I’m well and truly cornered and I have to write a column or something.

I find capitalising titles and headings tricky. For a long time I preferred the idea of nice simple sentence case over horrid complicated title case where you have to consider nouns, verbs, articles, adjectives, adverbs, conjunctions and prepositions and capitalise accordingly. All that grammar packed into one style! No thanks. But the more I’ve edited the more I’ve realised that capitalising every type of word except conjunctions and articles, and sometimes prepositions, is often a more straightforward prospect than working with sentence case. Why?

What is sentence case?

Sentence case is also called essential caps, minimum caps and uclc (upper case lower case). In this style you capitalise as you would in a sentence – apply a capital letter to the first letter of the first word, and then add caps as you would to a sentence in text.

Sounds lovely and simple. So what’s the problem? The problem, my friends, is that sentences in text aren’t all that easy to capitalise, because of proper nouns and words you might cap for other reasons such as to emphasise something or convey a particular meaning. Let’s look at why we might capitalise in a sentence.

Sometimes it helps to think of a capital as, literally, a cap. Perhaps with a feather. A fancy cap that we put on a proper noun to distinguish it from a general one. We use capitals to make it clear that we mean:

Capitals are also really useful to distinguish the many names that, uncapped, are English words: first names such as Amber, Bill, Cliff, Jasmine, Lance, Pinky or Pat, and myriad surnames including Smith, Gill, Bond and, er, Tingle.

Recently I saw a reference in the news to ‘Labour and co-operative politician Tracy Brabin’, which needed a capital C for ‘Co-operative’ to make it clear it wasn’t describing her manner but naming the political party (Co-operative Party) she was affiliated with. So, yes, for the most part we capitalise proper nouns, and for good reasons.

Cool, cool. But what about words and terms like ‘government’ and ‘marketing manager’? The convention is to keep these lower case in a general sense (‘the government believes’, ‘the marketing manager presents’) and capitalise them only as part of an official title: ‘Government of the United Kingdom’ or ‘Her Majesty’s Government’ and ‘Jay Patterson, Marketing Manager’.

However, bear in mind this point in New Hart’s Rules: ‘Capitals are sometimes used for a short-form mention of a title of a specified person, organization, or institution previously referred to in full.’ Examples are then given including ‘the Ministry’, ‘the Centre’s policy’ or ‘the University statute’. Note the ‘sometimes’. NODWE hedges similarly when talking about terms like ‘king’ and ‘queen’: ‘king cap. in titles (King Henry) and often the King, but king of the Visi-goths’; ‘queen cap. in titles (Queen Jane) and often the Queen, but queen of Castile’. So what is meant by ‘sometimes’ and ‘often’ in these mysterious entries? Style, that’s what. From here, your style sheet is your guide (not Guide, which, as we’ve discovered, is quite different). Your next requirement is consistency. (Had it been your Next requirement, it might have been a nice top.)

Capitals also acknowledge identity. That’s why the Associated Press (AP) changed its style last summer ‘to capitalize Black in a racial, ethnic or cultural sense, conveying an essential and shared sense of history, identity and community among people who identify as Black, including those in the African diaspora and within Africa’, adding, ‘We also now capitalize Indigenous in reference to original inhabitants of a place.’ Many publications, organisations and individuals worldwide have followed AP’s lead. The Guardian’s style guide, at the time of writing, capitalises ‘Indigenous’ when referring to ‘Indigenous Australians’ and ‘Indigenous people in Canada’ but does not yet capitalise ‘black’, with the following vital qualification: ‘If a subject, writer or editor of a story prefers to use Black then that choice should be respected.’

The choices of other communities need to be respected, too. Should you apply a capital to the word ‘deaf’, for example? The charity SignHealth explains the distinction it makes in its own communications between ‘deaf’ and ‘Deaf’:

The word deaf is used to describe or identify anyone who has a severe hearing problem. Sometimes it is used to refer to people who are severely hard of hearing too. We use Deaf with a capital D to refer to people who have been deaf all their lives, or since before they started to learn to talk … It is an important distinction, because Deaf people tend to communicate in sign language as their first language … There is a very strong and close Deaf community with its own culture and sense of identity, based on a shared language.

As an editor or proofreader, it’s more than likely the decision to capitalise words that acknowledge identity will not in fact be yours to make, but the decision of the subject, author or style guide. Your job is to help ensure that the right people are being approached for these decisions. If you don’t think they are, that’s when you raise your hand.

Now we come to Pooh Caps (there’s a phrase better written than said), the practice of capitalising Particularly Important Words. Here are Pooh Caps in action in The House at Pooh Corner: ‘When you are a Bear of Very Little Brain, and you Think of Things, you find sometimes that a Thing which seemed very Thingish inside you is quite different when it gets out into the open and has other people looking at it.’ The Chicago Manual of Style (CMOS) calls such capitalisation ‘pomposity’, but I’m not so sure. In social media in particular, it’s a thing (or a Thing) when it’s used with a particular intention. Sure, our work as editors and proofreaders is usually to uncapitalise words and terms such as ‘physics’, ‘school’ and ‘psalm’ – and I don’t know about you, but I’ve noticed that most common nouns assigned caps incorrectly by authors are those that are capitalised in other circumstances (‘Department of Physics’; ‘Snodsbury School’, ‘Book of Psalms’), and of course, just to keep things interesting, we have the proper-noun short-form consideration in Hart’s mentioned a couple of sections above. But sometimes the capital is being used for emphasis, and occasionally this is valid. Pooh uses caps for his own title ‘Bear of Very Little Brain’, and for the words that are important to him – thinking of a thing is a major event, and thinking of a thingish thing particularly so. Let’s pay attention to Pooh’s voice. Again, I’m glad I’ve written that sentence, not spoken it. 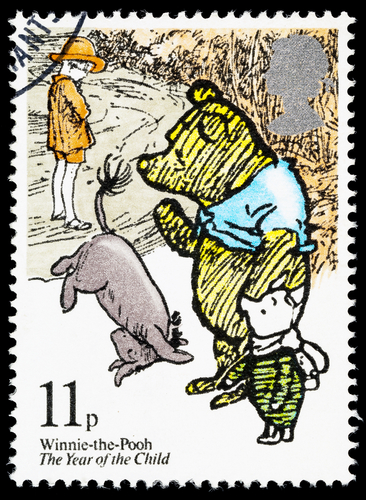 Pooh Caps are mentioned in Gretchen McCulloch’s Because Internet as an earlier version of ironic capitals, which she describes in an article about sarcasm on the internet: ‘Capitalizing Unimportant Words imposes a certain level of ironic detachment. Adding (TM) or periods between each word is optional but extra effective.’ In Because Internet, McCulloch asserts that even at Pooh Corner caps were used for irony: ‘“You’re a real friend,” said he. “Not like Some,” he said.’

However, people on Twitter aren’t displaying ironic detachment when they present their dogs as, for example, a Very Good Girl. They’re assigning a title to their pets, and a well-deserved one, no doubt. As ever, context, format and meaning have to be taken into account in this 3D chess we call editing.

So, where does this leave us? Running headlong towards title case, that’s where. I’ll cover this style in a later Finer Point column.

SignHealth. What is the difference between deaf and Deaf? signhealth.org.uk/resources/learn-about-deafness/deaf-or-deaf.