In this first of two blog posts, Julia Sandford-Cooke introduces us to podcasts and looks at how they can be a useful development tool for editors. She answers the following questions: 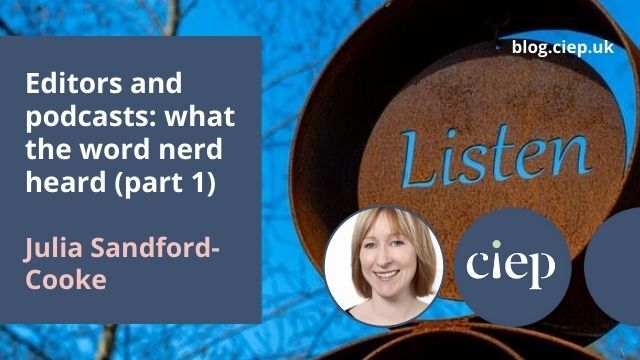 I have to admit something that you might find shocking. Brace yourself …

I don’t listen to BBC Radio 4. No, not even The Archers.

In fact, I haven’t listened to live radio, or live TV for that matter, for years. But I somehow still manage to be well informed on topics that interest me. In fact, spend any time with me and one thing I’m likely to say (other than ‘How can the dishwasher be full already?’) is ‘I heard [insert fascinating fact] on a podcast’.

According to my aptly named Podcast Addict phone app, I’ve spent 91 days listening to podcasts since 2016. Last week alone, 10 hours and 36 minutes of my time were accompanied by podcasts. So I must have spent 10 hours and 36 minutes on my morning walk, cooking, tidying, cleaning and, yes, dealing with the dishwasher. It’s just like listening to the radio – any task that would otherwise require me to listen to my own thoughts can be carried out while listening to other people’s. It’s my own form of curated content.

What is a podcast?

Podcasts are a form of on-demand audio media. Many people, at least in the UK, seem to think they are simply radio shows you download from the BBC website. Well, some are, but you’re missing out if that’s the extent of your podcast experience. The majority are standalone audio recordings, usually part of a series, researched, recorded and produced specifically for listeners to access via their computer, tablet or phone. You can download episodes to listen to when you want, or you can stream them if you have a reliable WiFi connection.

Episodes can be any length, from five minutes to a couple of hours. Most of those I listen to are between 20 and 50 minutes long – again, like a radio show. But unlike radio shows, many have transcripts, along with images, on their websites, so people who are unable to hear or have difficulty taking in spoken information can still access the content.

One of the many wonderful things about podcasts is that it’s very easy to create your own. Three of my friends (separately) started shows during last year’s lockdown – everyone can have a voice, though whether they have an audience is another matter and that, as with books, is down to promotion and word of mouth.

Do you have to pay for them?

Podcasts are generally free to access. However, a downside is that many have to keep stopping for adverts from their ‘sponsors’, which is a bit tedious if you’re used to ad-free media. But you can always fast-forward through them, and it’s worth putting up with the ads if it means the shows remain free. Others are funded by fans donating to Patreon or similar crowd-funding platforms – I support my friend David’s historical storytelling in Spooks & Bogles, for example, and the entertaining and erudite Strong Songs has more than 1,250 subscribers willing to pay a monthly fee to hear about the songwriting techniques behind their favourite tracks.

Most podcast apps and platforms, such as Spotify, are free for the basic service. I chose to pay £2.99 several years ago to get the premium version of my app and I still think it was a great investment.

Who listens to podcasts?

Well, who watches TV or plays football? Anyone who wants to. Anyone who can. Recent statistics suggest that 55% of the American population has listened to a podcast, and about 18% of people in the UK listen to at least one podcast every week. They are particularly popular in South America.

Some research suggests podcast listeners are ‘loyal, affluent and educated’ – and not necessarily young. I know a man in his mid 70s who likes nothing better than to plug in his headphones to spend some introvert time with the latest episode of his favourite science show.

Far from being the latest newfangled fad, podcasts are really pretty mainstream. It’s estimated that 14.6 million people in the UK listen to podcasts (numbers have shot up since the pandemic started).

They have been around for quite a while by today’s technology standards. They first began to gain momentum in 2004, to the extent that ‘podcast’ was declared word of the year by the New Oxford American Dictionary in 2005. There’s even an International Podcast Day™ on 30 September. Interestingly, organisers used to describe it as an opportunity ‘to educate current and future consumers about podcasting and advance the podcasting discipline’ but now simply say it is ‘a celebration of the power of podcasts’. An example, perhaps, of the impact of their recent popularity? 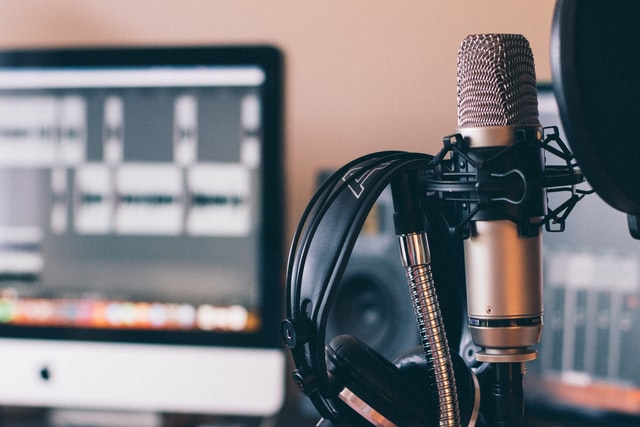 What can podcasts be about?

Part of the mainstream appeal comes from the huge variety of subjects that two million different podcast series inevitably bring.

Statistics indicate that British listeners are most likely to download podcasts in the genres of sport, news/politics and comedy (mostly produced by the ubiquitous BBC). There are apparently 18 different daily news podcasts in the UK alone but, sport, news and politics not being topics on which I wish to spend my leisure time, I subscribe to only a couple of the current top 100 iTunes podcasts, which is surprisingly few considering I follow more than 50 podcasts overall.

Personally, I prefer documentary-style factual content or autobiographical shows. In the mood for onstage anecdotes? Play The Moth. Hungry? Play The Sporkful. Fancy a bit of contemporary socioeconomic theory (and who doesn’t)? Play Freakonomics.

Podcasts can be fiction too, and the format allows for original approaches to dramatic audio production. I enjoyed the thriller Carrier (soon to be filmed for Netflix) but that’s because its star Cynthia Erivo can do no wrong. But most scripted shows are ‘docudrama’ style, often based on the discoveries of a (fictional) investigative reporter, and I find these get tiresome pretty quickly. I’d rather read a novel.

OK but how does all this tie in with editing?

Don’t know where to start?

With so many podcasts to choose from, it can be hard to identify the ones you’ll enjoy most. What are you interested in? Websites like Podchaser group shows by genre – business, technology, comedy, audio drama and so on – or check the iTunes charts to see what’s popular in the UK at the moment.

If you have a hobby or special interest, from quilting to paddleboarding, there’s bound to be a podcast (or several) that covers it. Or perhaps you’d like to hear the stars of your favourite 2000s TV show (like The West Wing, The OC and Gilmore Girls) reminiscing. Ten years ago, backstage gossip might have been in book format but today it’s actors and the production team interacting.

Just browse until something catches your interest and then stream it online – via a website or on Spotify – or download it to an app, which I prefer because it’s portable.

Still looking for ideas? The second part of this blog will give you a few more starting points.

Julia Sandford-Cooke of WordFire Communications has spent more than 20 years in publishing. When she’s not listening to podcasts, she writes and edits textbooks, speaks very bad Dutch and posts short, often grumpy, book reviews on her blog, Ju’s Reviews.

Photo credits: Listen by Nick Fewings; podcasting set up by Will Francis, both on Unsplash.