This year’s CIEP conference was held online, from 2 to 4 November. Attendees from all over the world logged on to learn and socialise with their fellow editors and proofreaders, and a number of delegates kindly volunteered to write up the sessions for us. Sheila Korol reviewed Choosing your words: Using the Historical Thesaurus of English to explore vocabulary, presented by Fraser Dallachy. 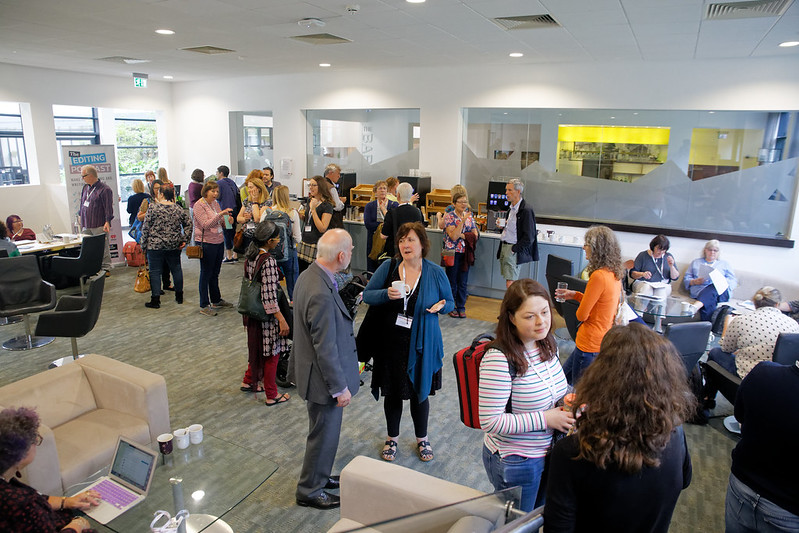 Delegates at the 2019 SfEP conference.

As deputy director of the Historical Thesaurus of English, Fraser Dallachy knows words. And his session was timely considering that the second edition was recently released in October.

The Historical Thesaurus is a true labour of love. The first edition was initiated in 1965 but not published until 2009, hardly surprising because the close to 800,000 words in the Oxford English Dictionary (OED) were individually handwritten on carefully labelled slips of paper. These papers were then sorted and re-sorted by hand until various categories were formed into what would eventually become the initial two-volume publication. A beautiful addition to any bookshelf no doubt, the paperback thesaurus itself was difficult to use even for its originally intended academic audience, who wanted to study the history of ideas as expressed in words.

Fortunately, a much more user-friendly online version also exists (ht.ac.uk), and part of Fraser’s job is to promote this publicly funded resource as a valuable tool for all word lovers. To this end, Fraser and his team continue to work closely with the OED to update words and dates online, striving for ever more accuracy in their historical record of the English language.

His team has also created various visualisations and graphs which users can choose from (and play with), including treemaps, sparklines and heatmaps. Thus, it’s easy to see when words based on a particular topic were historically used. Searches might lead, for example, to a timeline showing whether a word originated in Old or Middle English, whether the word is still used in the present, or how an entire category of words has evolved to reflect changing vocabulary.

But what the conference delegates seemed most excited about was the Time-Traveller’s Dictionary – a specialised resource meant for writers who want to filter out from the thesaurus only those terms actively used for a specific subject at a particular point in time. However, this remains a work in progress, so keep an eye on the Historical Thesaurus website.

Fraser would love suggestions on how to make the thesaurus even more useful and widely relevant for all word lovers, so please contact him if you have ideas at fraser.dallachy@glasgow.ac.uk.

Sheila Korol is a high school English teacher from Canada who has lived in seven countries over the past 25 years. She currently lives in Hong Kong and is transitioning into a freelance editing career. She has completed the Editing Certificate from Simon Fraser University and is an Entry-Level Member of the CIEP.