This year’s CIEP conference was held online, from 2 to 4 November. Attendees from all over the world logged on to learn and socialise with their fellow editors and proofreaders, and a number of delegates kindly volunteered to write up the sessions for us. Anna Baildon reviewed Susie Dent in conversation with Denise Cowle, the CIEP’s marketing director. 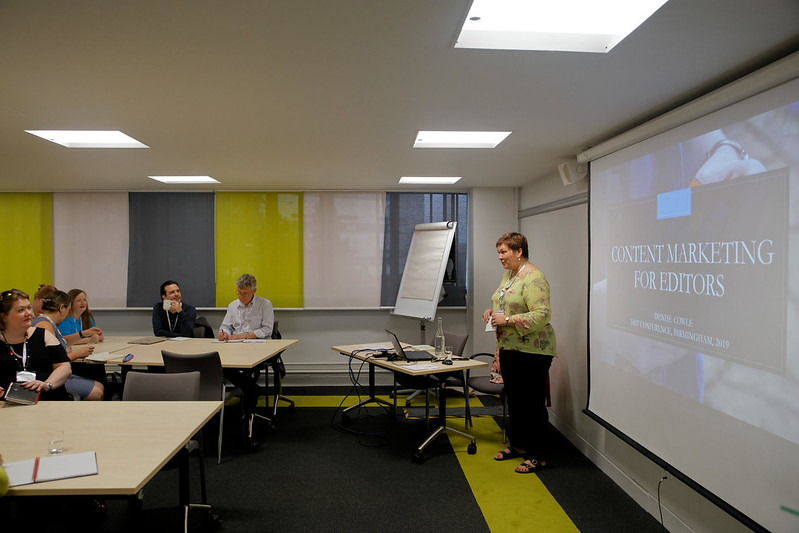 Denise Cowle presenting a session at the 2019 SfEP conference.

In the words of our chair, Hugh Jackson, this was ‘perhaps the most eagerly anticipated and most talked-about [session] of the conference’.

Susie Dent became our honorary vice-president in January 2016, and 2020 is the first year that conference has not fallen on a Countdown recording day, thus freeing her up to join us. She must be the UK’s most famous contemporary lexicographer and etymologist, and is a familiar broadcaster and writer.

Denise Cowle, our marketing director, did a superb job of facilitating the conversation, drawing on questions submitted by members. She seemed calm in the hot seat, as if interviewing such high-profile folk is what she does every day.

Susie spoke about her pre-TV career, mentioning her ‘nerdy interest’ in language. She admitted to having ‘no clue’ about what to do after university, and that lexicography had not always been her long-term plan. In 1992, while working at Oxford University Press (OUP) on English and bilingual dictionaries, her OUP boss persuaded her to give Countdown a go. She had declined Channel 4’s invitation four times as she is more comfortable ‘flying below the radar’ than being in the spotlight. Perhaps there’s an interesting point here about serendipitous professional opportunities being won by going beyond your comfort zone.

Denise asked Susie to speculate on what path her career might have taken if she hadn’t joined Countdown. Susie thought she would probably still be in publishing, ideally working on the Oxford English Dictionary (OED). When asked if she had ever considered editing or proofreading as a career, Susie said that she wouldn’t be suited to these careers as she wasn’t particularly pedantic about language. But she did say she was most interested in focusing on clarity and eloquence and observing usage rather than adhering rigidly to established rules.

The discussion turned to Countdown filming. It sounds pretty intensive; twice a month, the team gathers to do three days of filming to produce 15 shows. This gives Susie predictable gaps between filming, in which she can focus on her writing. Shorter pieces and those which can be written in chunks suit this timetable. Susie seemed apprehensive about writing fiction because of the pressure to produce a ‘linguistic wow’, but she did mention the possibility of writing under a pseudonym.

On the question of paper versus online dictionaries, Susie was firmly in favour of online for currency. She said she could envisage the demise of printed dictionaries, but interestingly she said there is a significant gift market in the US for the OED, despite the hefty price tag!

Denise asked Susie about 2020’s neologisms. A favourite of Susie’s is ‘quarantini’. After explaining the etymology of ‘quarantine’, she said she would not expect ‘quarantini’ (and many other COVID-19-related terms) to survive for long. She mentioned that some neologisms gain longevity if they are riffed upon and spawn new, related words, while others become dated and fall out of usage.

Susie talked about her word-of-the-day tweets. She usually avoids politics, aiming instead to choose something beautiful, amusing or topical. Her word for 3 November was ‘empleomania’, meaning ‘the overweening and manic desire to hold public office at any cost’. Make of this what you will! On the subject of word choices, her favourite word from her book How to Talk Like a Local is her selection for 1 January: ‘crambazzled’, a Yorkshire word meaning ‘prematurely aged from excessive drinking’.

Denise asked Susie about the hiccup with her latest book, Word Perfect, published in October. Susie explained that the book had been published using the wrong version of the text, with errors left in, after a pressurised production schedule owing to backlogs caused by COVID-19. She had questioned the title as potentially asking for trouble! I’m sure Denise’s sympathy was shared by everyone watching as Susie described how mortified she had felt. She wisely ‘decided to try to smile’ about it, tweeted to explain things, and in fact received no criticism. Nevertheless, she said that some lalochezia had been very useful!

It was interesting to hear about Susie’s broader experience of having her work edited, especially her view of the process as collaborative. She likes to work with copyeditors with whom she has an existing relationship, especially for book projects. She has had some issues when writing for newspapers, such as the addition of clickbait headings, or the meaning being twisted because the tone of voice has been changed.

Susie mentioned her work on the Something Rhymes with Purple podcast with Gyles Brandreth. She came to agree with Gyles, who told her that ‘it’s the most you thing you’ve ever done’. She thinks this is because it has a simplicity and intimacy, unlike studio work. I thought this chimed well with ‘flying below the radar’.

One of the final questions Susie answered was about her current reading. She is re-reading Our Mutual Friend and Tess of the D’Urbervilles for a forthcoming programme with Gyles on the language of Dickens and Hardy, but they are also two of her favourite novels.

I hope these selected highlights give a flavour of the event for those unable to attend. The session was a joy to watch, so let’s hope we have the pleasure of Susie’s company at future conferences. She was warm, professional and generous in sharing her love of language. 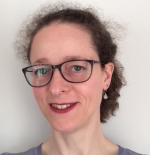 Anna Baildon is an Entry-Level Member and is relishing CIEP training to strengthen her expertise. She has worked in niche librarian roles in higher education and has significant experience in wrangling non-fiction copy into a publishable state. Anna has degrees in English literature and librarianship and a lifelong affinity with words. She plans to freelance, offering both copyediting and proofreading services.