You might think I’m just a meek and unassuming editor, but I have a secret identity. When I’m not correcting content, I may be stealing diamonds, exploring Egyptian tombs, solving crimes or perhaps even saving the world (twice from a renegade sheep). Despite my reputation for remaining calm under pressure, I have been known to scream, ‘Why are you just standing there? We only have three minutes to defuse the bomb!’ 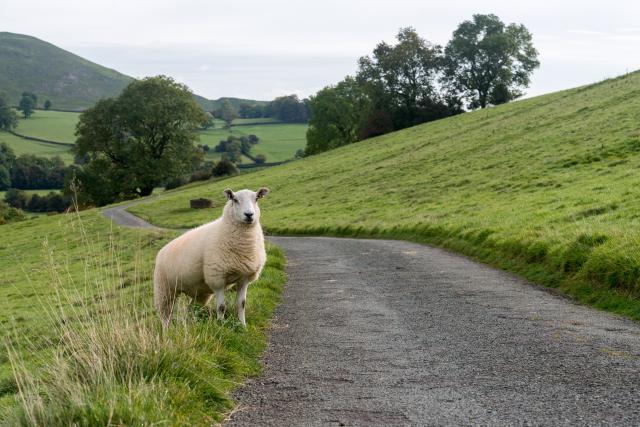 Yes, I’m an escape room enthusiast. Bear with me because the link to continuing professional development (CPD) isn’t as tenuous as you might think. After 20 years as an editor, I’m still committed to learning but I’ve completed most relevant courses at least once, so have begun to seek out new ways to build and apply my skills. After all, we editorial professionals don’t just spend our days correcting grammar and swearing at Microsoft Word – we also practise problem solving, time management, team working and lateral thinking. And all these skills are tested and strengthened in escape rooms.

What is an escape room?

Basically, you and your team of two to about seven people enter a room to solve puzzles relating to a particular theme or story within a set amount time (usually an hour but, increasingly, 90 minutes). In fact, ‘escape room’ is rather a misleading term. It’s really more about escapism than escaping. Although you may need to find a way out of a setting like a prison or cabin within the time limit, instead you could solve a crime, find a relic, save a pirate ship or pass all your wizarding exams. Sometimes the challenge is just collecting as many toy cats as you can. You won’t actually be locked in (I believe that’s illegal) and, in fact, many rooms allow you to leave at any time – but what would be the fun of that? I won’t spoil your future games by describing the puzzles you’ll encounter in detail but they may involve matching words, spotting inconsistences, identifying patterns, remembering sequences, cracking codes, finding pieces of a jigsaw and completing it, or something more physical, such as shooting foam bullets at a target. Typically, you’ll need to identify a numeric sequence or locate a key for a padlock. It’s seen as bad form to require external general knowledge (that’s what pub quizzes are for) so, as long as you know simple maths and the alphabet, you’ll be able to make a start. If you get stuck, your games master, who monitors you on CCTV, can provide a hint.

Most escape rooms are aimed at adults but switched-on kids aged over eight or so often excel as part of a grown-up team, as long as the theme isn’t too scary – my 11-year-old escape room veteran refuses to do any rooms relating to Egyptian mummies, zombies or school detentions. As for the rooms themselves, some are charmingly homemade, some are slickly mechanised and some have amazing movie-quality sets but all require players to accept the scenario in which they find themselves and work together to achieve a mutually beneficial outcome. Can you see the parallels with publishing yet? 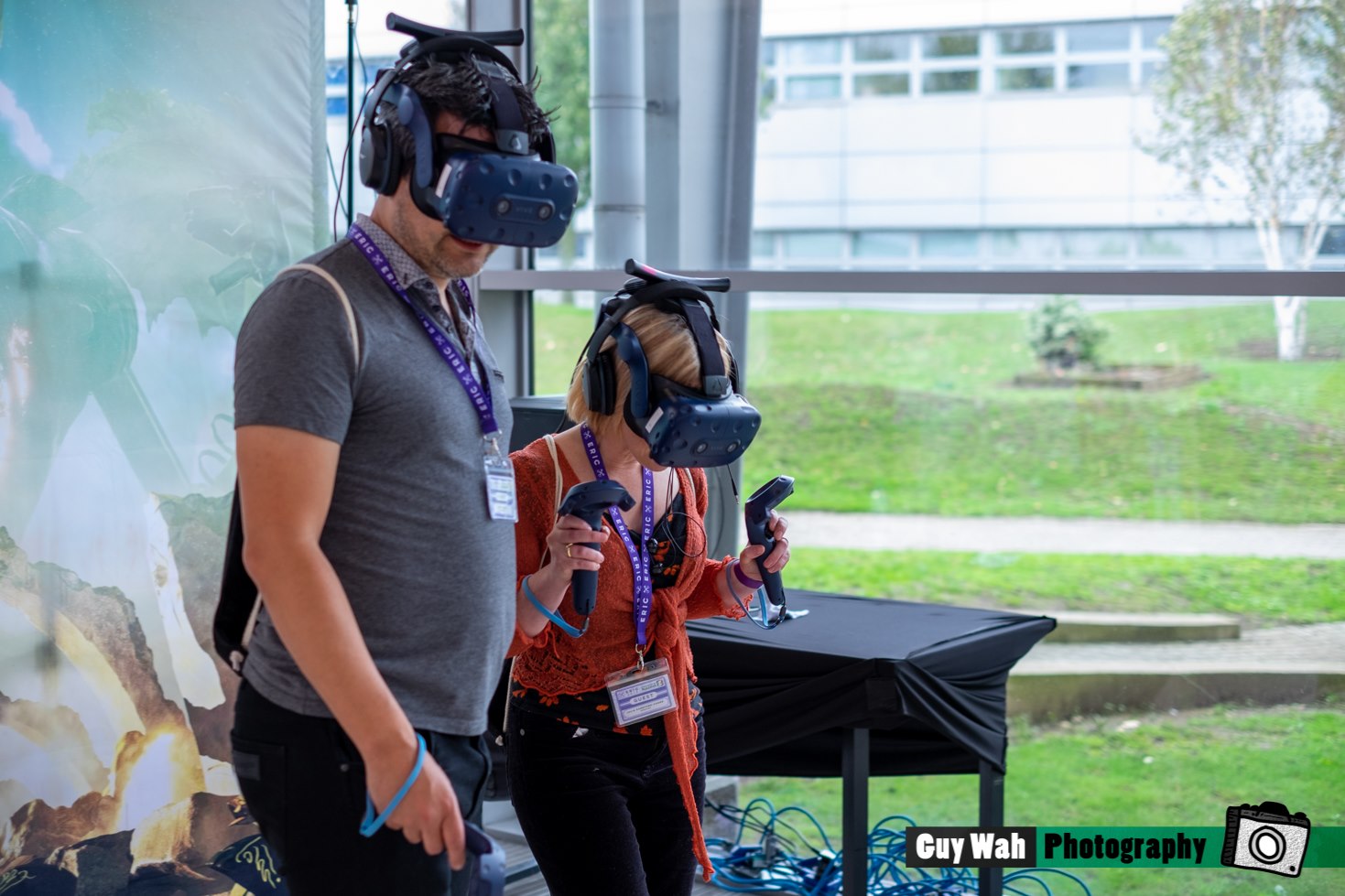 Julia and her husband test a virtual reality game at ERIC. Photo by Guy Wah Photography.

Take my nearest venue, Fakenham Escape Rooms. In this game, we have been employed by the International Rescue Corps to complete the work of a missing professor who had been working on new technology that predicts the time and location of natural disasters. Our mission is to find his research and coordinate our findings to discover where and when the next disaster will be. It’s a fun, immersive room and, as it happens, we were top of the leader board for six months until some professional escapologists (pah!) completed it slightly quicker. It’s the taking part that counts – but beating other teams does motivate competitive players like me. The owners subsequently asked us to test their new room before it officially opened, and listened to our constructive feedback on the experience, a bit like a physical version of proofreading.

It’s all about teamwork

So, what makes a good escape room team? Well, I’ve edited enough business books to be intimately acquainted with the Belbin team roles, and have played enough escape rooms to know that combining people with different skills is going to get the job done quicker and better. For example, my daughter has a mind like a trap and is good at finding hidden items. My programmer husband can apply logic to any situation, and I delegate all the maths puzzles to him. Some of the friends I’ve played with are efficient, organised and focused. Others are highly creative or have an in-depth knowledge of binary. As for me, when I asked for feedback on my performance, Team-mate 1 (my daughter) said I’m quick to make connections between different elements and Team-mate 2 (my husband), after some thought, said I’m better at reading than he is. Our greatest triumphs have been a result of focusing on the goal, clear communication and mutual respect for each other’s abilities. All of which are ingredients for successfully managing any project.

Benefiting more than just me

I attended two excellent conferences in 2019. One was (naturally) the SfEP conference at Aston University. The other was the amusingly named ERIC – the Escape Room Industry Conference in glamorous Dagenham. Covering everything from game theory to marketing, with a little acting thrown in, it was the most enjoyable small-business foundation course that you can imagine. I came home brimming with ideas for developing my own editing business (‘escape rooms’ now features as a key word in my CIEP Directory entry – puzzle tester for hire). As a textbook specialist, I’d love to look at ways of engaging learners via puzzles and for improving testing methods such as those tricky multiple-choice questions that authors always struggle to perfect.

What’s more, while I’m not quite ready to open my own escape room (watch this space), I made a contact at ERIC which has resulted in another exciting new project. I’ve joined forces with my local library to coordinate a treasure trail for teams of Key Stage 2 pupils (9 to 11 year olds) in which they have to use the library facilities to tackle puzzles and act out a narrative – hopefully developing their literacy and problem-solving skills, and their enthusiasm for libraries, in the process. 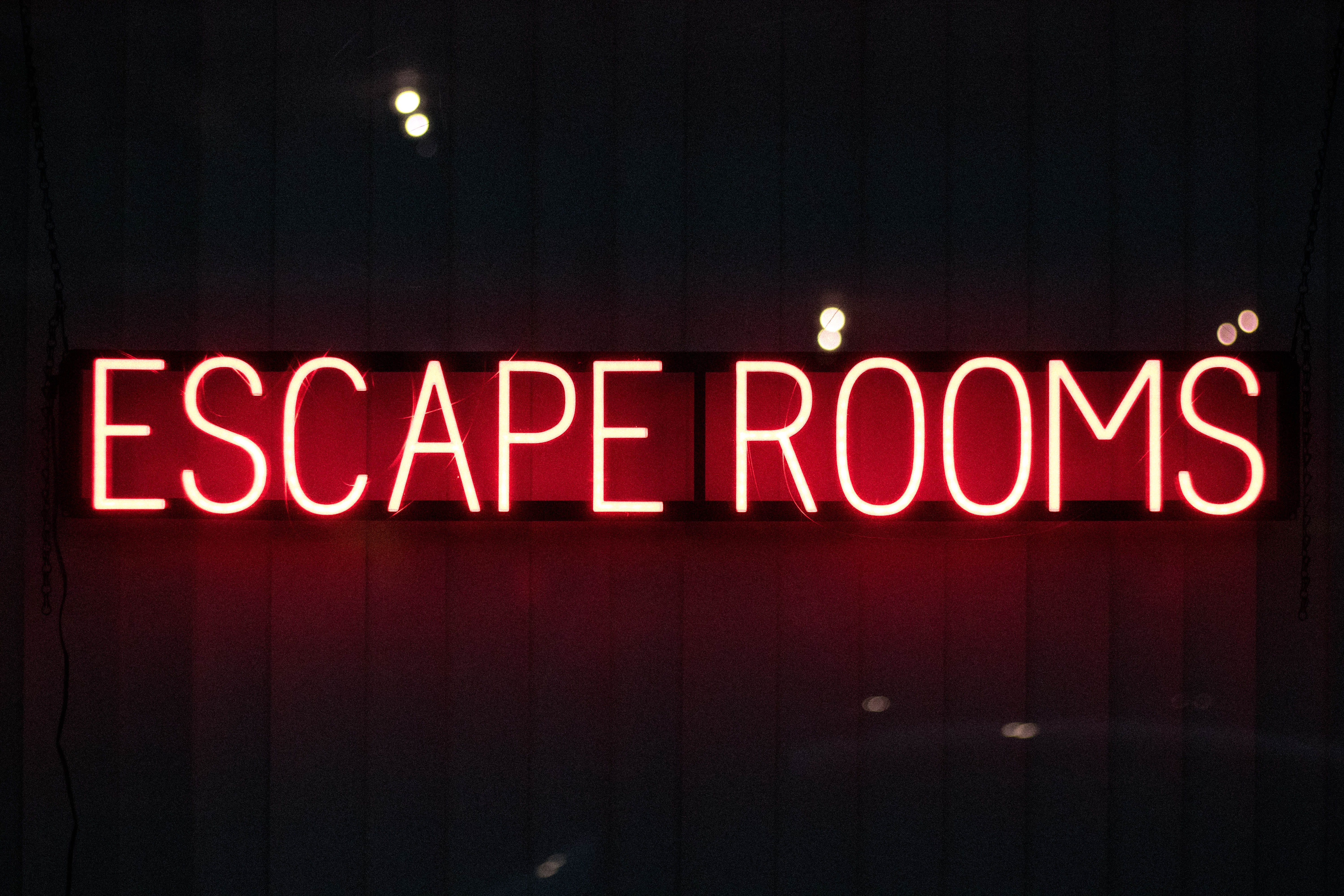 Try it for yourself

There are now about 1,500 escape rooms in the UK, and maybe 20,000 in the world, so there’s likely to be at least one near you. Some are inevitably better than others – read reviews before you go to gain an idea of quality because it’s admittedly not a cheap hobby. The typical cost is around £20 per person, and it can be even more expensive if (as a purely hypothetical example, of course) you choose to celebrate 20 years with your husband by travelling to Margate to play five games over two days (Kent being the unlikely escape-room capital of the UK). It’s still cheaper than formal training as well as fun, educational and a welcome break from those ubiquitous screens.

Julia Sandford-Cooke of WordFire Communications has 20 years’ experience of publishing and marketing. She has written and edited numerous textbooks, specialising in vocational education, media studies, construction, health and safety, and travel. In her spare time, she’s a pirate, spy and astronaut.

Thinking about your CPD plans? The CIEP offers a wide variety of courses, and more informal CPD is available through its members’ forums and local groups.

Susie Dent on how words have fused:

The word collaboration is from the Latin for ‘working together’. It may be overused as a word, but its results can be remarkable. A well-known story tells how, when John F Kennedy toured NASA in the mid-1960s, he came across a man mopping the floor. ‘What does your job entail?’ the President asked. The reply came: ‘I’m helping put a man on the Moon.’ The exchange between the two men beautifully illustrates the value of a shared objective.

Collaboration can happen linguistically too – notably when words come together and create something new. ‘Brunch’ is a famous example, alongside ‘motel’ and ‘modem’. ‘Blends’ like these are a form of word-play that we have been indulging in for centuries: revellers in the 1800s were already talking about alcoholidays, while nobodaddy was the term du jour for someone who had dramatically fallen from grace. In the 20th century, smog (smoke + fog), ginormous (gigantic + enormous) and piccalilli (pickle + chilli) continued the vogue. One of the best was surely pifflicated – a useful descriptor for the act of ‘being drunk and talking piffle’.

It was Lewis Carroll who gave us the word ‘portmanteau’ for such creations, based on the image of words that are ‘packed together’ like two halves of a suitcase. He himself gave us some of the best – chortle, for example (chuckle + snort), as well as slithy (slimy + lithe) and mimsy (miserable + flimsy).

Today, blending is still the most popular mechanism for creating a new word. Some of the results may be fly-by-nights, but they raise a smile nonetheless. We all know about bromances and labradoodles, but how about anticipointment, the disappointment that comes from something eagerly anticipated? A snaccident, meanwhile, is the inadvertent consumption of an entire packet of biscuits when you meant to have just the one.

Others look set to stay the course – hangry was a recent addition to Oxford’s dictionaries, defined as ‘bad-tempered or irritable as the result of hunger’. Devon’s moodle, meanwhile, meaning to ‘dawdle aimlessly’, is a euphonious blend of ‘mooch’ and ‘noodle’. But if I had to choose a personal favourite from this century, it would be probsolutely: the pithy and highly useful articulation of a ‘definite maybe’.

Hard-working, innovative, useful and fun – linguistic collaborations may not put a man on the Moon, but they can offer some very useful pointers for successful teamwork (no probsolutely about it.)