The information team is made up of the information director (currently Abi Saffrey), plus commissioning editors (at the moment Cathy Tingle and Liz Dalby; Harriet Power and Julia Sandford-Cooke will join the team in early 2022). We work quite closely as a team, though we all work slightly differently. We have varying areas of interest outside the core skills of copyediting and proofreading, too, and this helps when we come to divide up work between us. 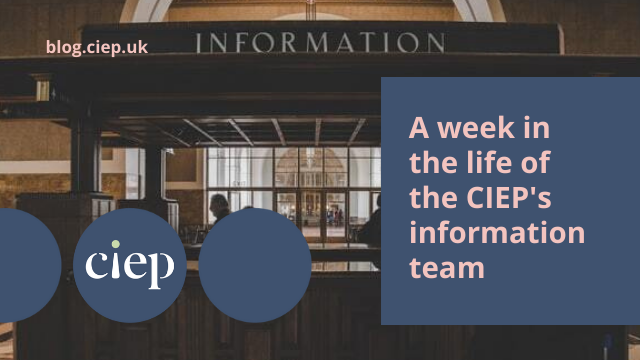 The information team editors are paid for 15 hours per month of their time, so the work is very much part-time and must fit in around other client work, plus various caring responsibilities such as looking after children, not to mention outside interests and downtime. In practice, this means we tend to spend a little time most days on information team work, as there’s always something to be done!

What we work on

The work is a combination of dealing with small tasks as they arise, commissioning and compiling recurring content for the two newsletters (columns, book reviews and round-ups), and commissioning or writing one-off blog posts or fact sheets, plus longer-form focus papers and guides. We also look at material on the website that needs updating or rewriting, and we answer various questions from members and other interested parties via our team email address. We all write content when necessary, such as blog posts and fact sheets, and Cathy also compiles the quiz – a bimonthly feat of humorous ingenuity.

Who we work with

Abi is our main interface with the Council, but we also all communicate directly with various Council working groups, such as the Values Working Group (ValWG) and the Environmental Policy Working Group (EPWG). We also sometimes work with other directors, especially the training, marketing and communications directors. To get resources laid out and looking as they should, complete with CIEP branding, we work with the design team via the CIEP’s design coordinator, Rich Cutler.

A typical week, if there is one, is therefore a combination of ‘keeping things going’ – answering emails, communicating with regular contributors, making corrections to existing resources – and working on new resources and content. We all watch what’s happening in the forums, to see what members might need, and we stay in touch with the wider world via Twitter, LinkedIn and Facebook, for example, to find ideas and contributors from the CIEP and beyond. If there are patterns to our work, they are governed by where we are in the publication cycle of the two newsletters – they go out in alternating months. Each of us usually has several longer-term resources that we’re working on at any given time.

The content we produce is both inward-facing (for members of the CIEP) and outward-facing (for non-members of the CIEP). The Edit and Editorial Excellence are our two newsletters, for members and non-members respectively. These help us highlight new resources and other relevant content. Each issue has a loose theme, which we decide in advance. Both newsletters are a real team effort, with content drawn from all three of our remits and the many contributors we work with. Abi also runs the blog, as she has done for several years, and a lot of our content is hosted there and linked to from the newsletters.

We keep in touch with each other via Slack, which enables us to work together although we are in distant corners of the UK – Cathy is in Scotland, Abi in the east of England and Liz in the southwest. There’s usually a conversation going on about some resource or other, or a task that needs doing or a decision to be made, and occasionally personal things such as birthday cake, children with colds, or holidays. We all understand that we have other commitments, so although we all try to respond as quickly as we can, we’re not on call 24 hours a day. Although we rarely meet in person, especially right now, the regular communication we share helps us feel like a proper team. When so much of what we do in our professional lives is done alone, this is a real pleasure.

Check out all of the CIEP’s resources! 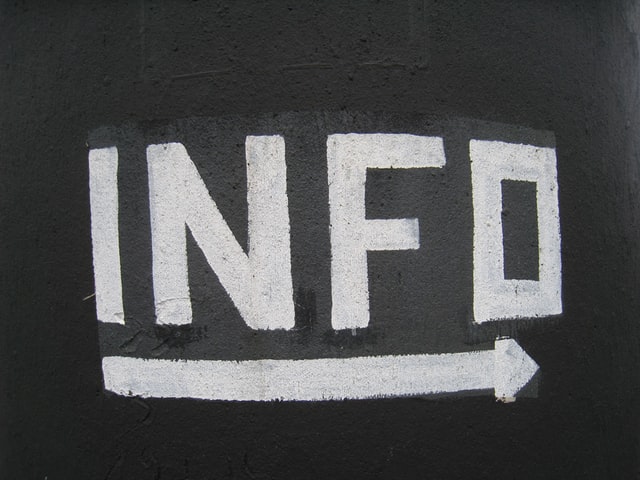 About the CIEP’s information team

The CIEP’s information team works with contributors across the globe on guides, focus papers, fact sheets and, of course, blog posts. If you’ve got an idea for a resource, get in touch: infoteam@ciep.uk

Photo credits: information by Philip Strong; info by Giulia May, both on Unsplash.

Two of the strangest months in memory, recorded through our social media accounts

Times such as these are tricky for a social media team whose focus is on publishing and freelancing. As with pretty much everything right now, long term we don’t know what COVID-19 might mean for publishing, the book industry, or editors and proofreaders. We entered April 2020 wondering what we could communicate to our audiences on a day-to-day basis. Too much doom would be unhelpful. Too much levity would be unwelcome. What to do? Like so many others, we took each day at a time. 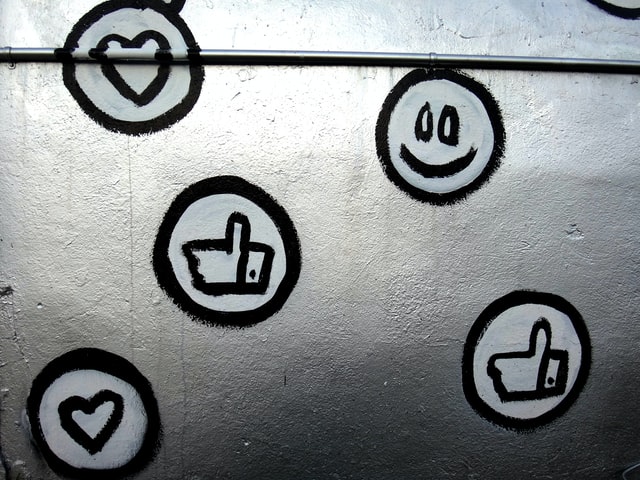 But heartening developments emerged, at least where publishing was concerned: increased book buying during lockdown, and the appearance of online book festivals and other events, with the Hay Festival, from 18 to 31 May, presenting an impressive array of personalities including our own honorary president, David Crystal. (David also starred in Mark Allen’s new podcast, That Word Chat, on 11 May.) Online events, by their nature, could include many more people than would have attended physically. ACES, the society for editing in the US (@copyeditors), took its conference online with #ACES2020Online on 1 May, and we were promised great things by SENSE, the Society of English-language professionals in the Netherlands (@SENSEtheSociety), whose online conference was to take place in early June.

We covered the updating of dictionaries that the coming of COVID-19 required, so that editors and proofreaders were informed about how to refer to the virus. We posted articles about new terms such as quarantini and coronacoaster, and terms that were gaining popularity such as infodemic, as well as whether we were using older terms differently now. We reminded our followers of the differences between similar terms we were now using a lot, such as hoard and horde (‘There are hordes of people hoarding toilet paper’, one Facebook follower observed).

Keeping up with tech

Video conferencing packages are now part of our lives in a way they never were before. We covered Zoom in various ways, from why Zoom makes you tired to sports commentator Andrew Cotter’s Zoom meeting with his two Labradors: a treat. Meanwhile, Cambridge Dictionaries introduced us to new video conferencing terms like zoombombing, zumping and teletherapy. Merriam-Webster noted the coining of two news-and-phone-related phrases: doomsurfing and doomscrolling.

More attention is being paid to bookshelves in these Zoom days (see ‘Bookcase Credibility’, @BCredibility, an account launched in April that comments on the bookshelves of various public figures). Of course, at CIEP we appreciate a good bookshelf (and a good book nook, a scene or figure that can be placed between shelved books). On 25 March we had proved ourselves ahead of the curve by asking our Twitter followers to #ShowUsYourShelves. To fill these shelves still further, during April and May there were a number of articles and postings about the books we could read in lockdown, to comfort us, return us to our childhoods, inspire, uplift or offer us escape, or simply to get us through. We enjoyed artist Phil Shaw’s ordering of books to tell a story with their titles, something that Orkney Library (@OrkneyLibrary), now temporarily closed, had often done for its 70K followers. And, remaining with libraries, the true story about the cleaner who rearranged the books in a library in size order – oh, horror! – inspired sympathy and hilarity in many.

Suddenly, actors and other artists had time on their hands and were doing impromptu readings and recitals. Jennifer Ehle, Elizabeth Bennet in the famous BBC 1995 adaptation of Pride and Prejudice, read the novel chapter by chapter, and we shared this on Twitter on 6 April. Andy Serkis read The Hobbit online for charity. @SirPatStew (Sir Patrick Stewart) read a Shakespeare sonnet every day until 22 May. Our post announcing this got 83 likes and 33 shares from our delighted Facebook followers. 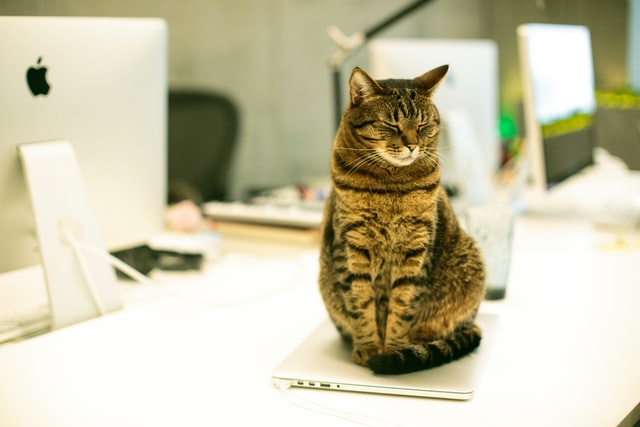 Of course, we editors and proofreaders are, for the most part, well used to all aspects of working from home, from furry assistants to endless tea or coffee drinking. And, alas, with beverages occasionally comes spillage. One of our most popular posts on Twitter was about an artist who made coffee stains into illustrations of monsters. There were a lot of them. Boy, was he unlucky with his coffee.

If you’re a devotee of the CIEP Facebook page, you’ll know that there’s a Friday Funny at about 4pm every week to send everyone off into the weekend with a smile. These are often comic strips by book-appreciating illustrators such as John Atkinson or authors who understand the trials of working from home such as Adrienne Hedger. When we’re very lucky, the legendary Brian Bilston releases a poem. His ‘Comparative Guidance for Social Distancing’ got 160 likes and 105 shares on our Facebook page, and it wasn’t even posted on a Friday. Sometimes the stars align and there’s a cat-and-books story we can post at the end of the week. Such an event took place on 22 May, when we enjoyed Horatio, a cat who wears (or, really, bears) costumes to promote his local library. As one Facebook user commented, ‘That is a patient cat.’ Truth.

We only started posting our blog-based LinkedIn content regularly last June, and since we passed the 10,000 followers mark last August our followers have increased again by another 8,000. Since lockdown, engagement has reduced as many of our followers seem to be working parents who are grabbing opportunities to work while suddenly morphing into teacher mode. During April and May 2020, posts that proved popular included: Denise Cowle’s week in the life of an editor (more than 8% engagement rate and 45 likes), a post by Intermediate Member Hilary McGrath sharing tips for staying motivated when starting a course (more than 4% engagement rate and 38 likes) and, showing reading-related content is our bread and butter, Abi Saffrey’s post about evaluating her year in books (more than 5% engagement rate, 32 likes and 8 comments).

Rounding up the round-up

During April and May 2020 on the CIEP’s social media, the emphasis was on editors and proofreaders looking after themselves, diverting themselves, keeping informed and looking for light where it could be found. As ever, our social media was overwhelmingly about support. We got a new emoji on Facebook – ‘care’, the usual little yellow head hugging a heart. Gotta tell you, it’s coming in useful.